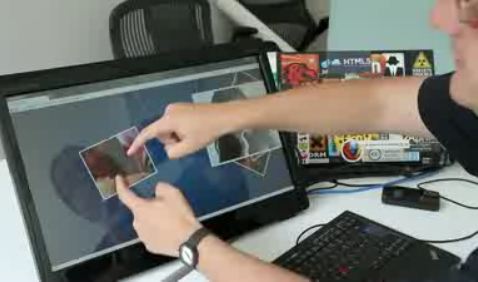 Mozilla released the third beta of its Firefox 4 Web browser today, introducing multitouch input support for Windows 7, in addition to a number of speed improvements. The beta can be downloaded and tested in more than 30 languages and on all platforms, including Linux and Mac OS X.

The multitouch support included in the beta release will allow Windows 7 users to interact with the Web using gestures similar to the ones iPhone and iPad users take for granted. Given the plethora of touchscreen smartphones and tablets users are exposed to these days, it’s finally time that desktops and laptop owners — at least ones with touch-enabled Windows PCs, like HP’s TouchSmart — get to experience the Web this way. The standard touch gestures of swiping, pinching, dragging, rotating, and zooming are supported.

The new release also includes a number of speed improvements, especially on JavaScript-reliant sites like Gmail or Facebook which can load slowly on older browsers.

At a time when Google’s Chrome and Apple’s Safari, both known for their lightweight speediness, are seeing a meteoric rise in their market share, it’s sensible for Mozilla to avoid being seen as a laggard.

This is an exciting time for developers, who will be able to leverage the new form of interaction and add another dimension of use to their Web apps. Firefox developers Paul Rouget and Filipe Gomes demonstrated the multitouch capabilities on video and outline the technicalities of incorporating “touch events” to Web pages in their blog post.

Last month, the second release of Firefox 4 added some much-awaited improvements to the browser like App Tabs, CSS transitions, and the relocation of tabs to the top of the Window. Previously, we also covered the first release of the Firefox 4 beta, noting its vast improvements in speed and other radical advancements.