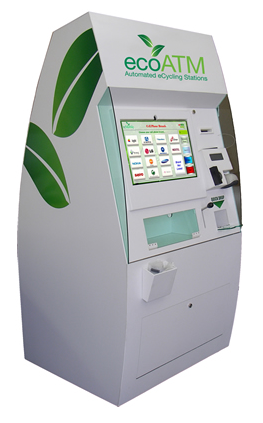 Coinstar is all about kiosks, and not only the ones that count your coins and give you cash. It also owns and operates the redbox DVD rental kiosks popping up in super markets. Now it’s extending its reach even further with an undisclosed investment in EcoATM, maker of kiosks that pays you for recycling your old electronics.

E-waste is a mounting problem. Landfills are starting to brim with tossed out computers, printers, fax machines, music players, mobile phones and more. Because these electronics are made up of multiple materials — some that are more toxic to the environment than others — many former owners have no idea how to best dispose of them. Some manufacturers have even started programs allowing people to send used items back for proper disposal. EcoATM’s goal is to make this whole process easy and rewarding.

When you drop off electronics at one of the company’s kiosks, it instantly assesses their value and pays you in either cash or coupons. The stations use visual identification techniques to determine how much should be doled out. EcoATM has partnerships with 50 companies around the world that come retrieve the waste and either resell it or properly recycle the components.

Coinstar CEO Gregg Kaplan says he expects EcoATM to become a lucrative business, estimating that about $7 billion worth of used mobile phones are thrown away in the U.S. every year. Their components can be worth even more. According to SmartPlanet, about 35,274 pounds of copper, 772 pounds of silver, 75 pounds of gold and 33 pounds of palladium are recovered from every million cell phones recycled.

Now two years old, EcoATM told Earth2Tech that it plans to roll out 200 kiosks in the U.S. by the end of 2010. Instead of installing them in supermarkets, it will probably place them with electronics retailers like BestBuy or RadioShack. This would make coupons a more compelling incentive.

Based in San Diego, EcoATM previously raised a round of funding in February led by Tao Venture Capital Partners.