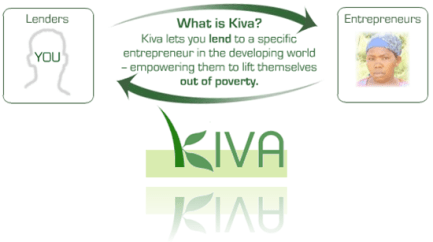 Kiva, the startup that made micro-finance a household term, announced today that it has landed a $5 million grant for the next three years from social impact investment firm Omidyar Network. The grant will match up to $2 million in loans transacted on the site during each of the next two years.

Omidyar Network, started by eBay founder Pierre Omidyar and his wife Pam, funds startups and projects that could positively impact the developing world, the environment, or the way people connect with one another. Some of its more notable investments include social news aggregator Digg, thin-film solar developer NanoSolar, solar lantern maker D.light Design, and peer-to-peer money lending network Prosper. Given this background, Kiva is a clear fit.

In addition to loans, some of the grant — the largest the nonprofit has ever received — will go toward upgrading Kiva’s operations, namely its technology platform, which allows people to send small amounts of money (usually about $25) online to foster businesses elsewhere in the world. Kiva allows lenders to choose who and what businesses they want to support based on location, biographies of those involved, risk levels, and how much they have already raised.

To make sure loans make it into the right hands, the organization works with a constellation of field partners around the world — smaller micro-finance groups on the ground that work closely with local communities. Some of the money from Omidyar will go toward expanding these partnerships. Money is passed back and forth between all stakeholders via PayPal.

Based in San Francisco, Kiva recently hit its fifth anniversary. It continues to be the most popular nonprofit of its kind. Its Board of Directors already includes LinkedIn co-founder Reid Hoffman and Jenny Shilling Stein of the Draper Richards Foundation. Now Amy Klement, vice president of investments for the Omidyar Network will also join.