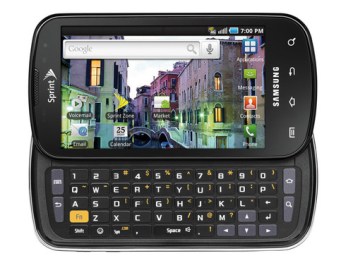 Samsung’s plan to invade U.S. cellphone carriers with its Galaxy S line of Android phones continues with the release of the Epic 4G on Sprint. The carrier announced today that the phone will launch on Aug. 31 for $249.99 (after $150 instant and $100 mail-in rebates). It will begin taking reservations this Friday.

All of the Galaxy S phones share the same basic specifications — including a 1 gigahertz Hummingbird Samsung processor, a 4-inch Super AMOLED screen, 5 megapixel camera, and Android 2.1 with Samsung’s TouchWiz skin — but each have their own hardware and software customizations for their specific carrier. In the Epic 4G’s case, it’s the only one with a slide-out physical keyboard, as well as a front-facing camera for video conferencing.

Befitting its name, it’s also the only Galaxy S device with support for 4G. Now Sprint users will have another Android phone to consider, in addition to the HTC Evo 4G,  if they want a 4G device. To help avoid confusion, Sprint has put together a video comparing the two phones (see below).

In my testing of the “Fascinate” Galaxy S device, the Super AMOLED screen certainly lives up to Samsung’s hype. It was incredibly bright, and the company says it will perform better in sunlight than other OLED displays. It was also one of the fastest Android phones I’ve used — touchscreen interaction like swiping and pinching was fast and smooth, applications loaded quickly, and there was none of the sluggishness I’ve seen when testing the Evo 4G.