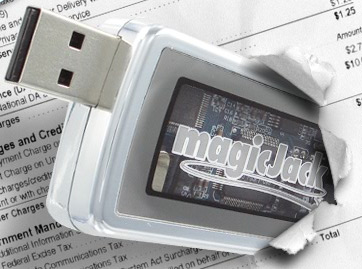 VocalTec, the company behind the popular magicJack internet phone device, has an even more ambitious plan for delivering phone calls via the web: making them free. The company is readying a new product, dubbed magicTalk, that will let users make completely free phone calls from their computers, smartphones, and iPads, reports the AP.

Users will get a phone number associated with the magicTalk software, and they’ll also be able to transfer their existing numbers to the service for a fee. MagicJack users will be able to do the same soon. The software will be available next week for Windows and Mac computers — with iPhone, iPad, Android, and BlackBerry versions to follow in September or October, according to VocalTec CEO Dan Borislow. The company is unsure if the smartphone apps will be restricted to WiFi, or if customers will be free to use the apps on 3G cellular networks.

There will be no time limits on calls, and users would only get charged if they make a call to numbers outside the U.S. and Canada. VocalTec is able to keep the calls free because it operates as a phone company, and can subsequently charge other phone companies to connect to magicJack and magicTalk numbers.

But, as the AP points out, the new service likely won’t rake in as much as the widely advertised magicJack — a tiny device that plugs into a computer’s USB port, and allows regular phones to make calls routed over the internet. It costs $40, and comes with a year of unlimited calling in the U.S. and Canada (additional years cost $20). VocalTec is working on a standalone version of the magicJack that doesn’t require a computer to function.

Earlier this year, the company also announced an ambitious wireless device that would allow users to route their cellphone calls over their home internet connections — saving cellphone minutes in the process. The device is now stalled, says Borislow, because it was forced to use low signal power levels to avoid legal issues on the use of wireless spectrum. The compromise also negatively affected the range and sound quality of the device, and the company is now looking to partner with a carrier to avoid the low signal power restriction.

In July, VocalTec merged with YMax, the company originally behind the magicJack. The combined company’s value is around $300 million, and this year it expects to earn between $110 million to $125 million in revenue.