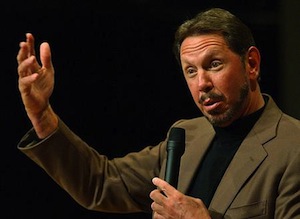 Oracle sues Google over Android — Oracle announced this week that it has filed suit against Google for alleged patent and copyright infringement. The business software giant, headed by Larry Ellison, said that the suit concerns intellectual property related to the Java programming language.

With Skype, Marc Andreessen is the new king of Silicon Valley — HP’s CEO ouster. Facebook’s coming war with Google. Skype’s IPO. What do these headlines have in common? One man: Marc Andreessen.

Why Starbucks keeps seeking Internet froth — Starbucks is declaring itself a “content curator” with its new Digital Network, an assemblage of free news, music, and other content available to customers using its now-free Wi-Fi network. We investigate why the ubiquitous coffee chain keeps trying to reinvent itself as an Internet startup.

Bay Area soon to be home to 5,050 more EV charging stations — In the San Francisco Bay Area, one of the most progressive regions when it comes to advanced transportation, the Air Quality Management District is funneling $5 million into an initiative to roll out 3,000 home chargers, 2,000 public chargers in commercial areas, and as many as 50 rapid charging stations along nearby highways.

New Apple TV renamed iTV — gains apps, restricted to 720p HD video — In May, we reported that the next Apple TV would potentially retail for $99 and run on iPhone-like hardware with iOS. Engadget has received information on the project, which apparently has been renamed iTV (the original name for the Apple TV).