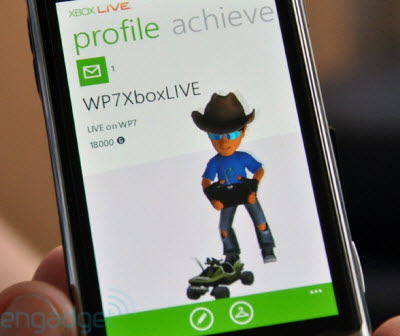 Microsoft has finally shown off a bunch of Xbox Live-enabled games that will be available for its Windows Phone 7 mobile devices this fall.

Engadget saw a number of game demos working on Windows Phone 7 handsets. They include familiar console game properties like Castlevania, Halo: Waypoint, Star Wars, Crackdown and Guitar Hero. There are also newer titles such as Ilomilo, made by Microsoft Game Studios. The company is launching the mobile game platform with more than 60 games. New offerings will be available for download to the phones via the Xbox Live Marketplace, which is the same market place used on the Xbox 360 game console.

Xbox Live will be fully integrated into Windows Phone 7, without much functionality missing from the console version. You can use your own fully rendered interactive avatars from Xbox Live on the mobile phones. You can customize the avatar’s clothing, accessories and more. Your Xbox Live messages, friend list, status, achievements, and leaderboards will be accessible on the phones as well. Xbox Live has more than 25 million members on the Xbox 360.

Among the game titles Engadget saw were Rocket Riot, Crackdown 2: Project Sunburst, The Harvest, Ilomilo, Bejeweled, Max and the Magic Marker, and Uno. The demo phones were from Samsung and LG. The frame rate was good even during intense 3D sequences. Touchscreen response time was pretty quick and accurate. Crackdown 2 uses Bing maps to create its levels. For the launch titles, the multiplayer options are limited to turn-based games.

I’m waiting to get my turn at reviewing the games on Windows Phone 7 as well. But it’s good to see Microsoft finally focusing its phones on the content that it is good at: games.

Update: Microsoft’s formal announcement has now been made at the Gamescom conference in Cologne, German. There, the company said the idea is to put Xbox Live at your fingertips, anytime, anywhere. The Xbox Live hub on Windows Phone 7 phones will let you find games more easily. You can try games before you buy them.

The titles announced include: