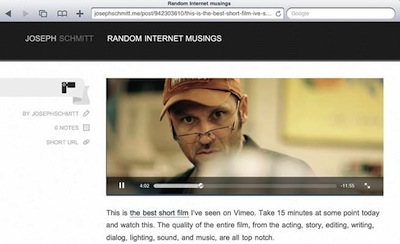 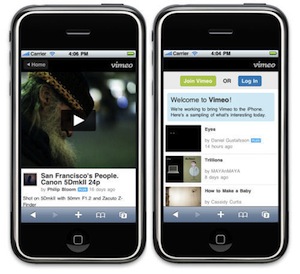 Vimeo says it’s going to be the latest video company using the new HTML5 format as its path onto mobile devices. The site plans to release a “Universal Player” later today that will detect your smartphone browser and determine what video format it will support. So it might play in HTML5 on an iPhone or iPad, but play in Flash on an Android phone.

Vimeo already offers a mobile-friendly website featuring videos that can play on iPhones and Android devices. But Vimeo’s content, like YouTube’s, isn’t limited to the site itself. It’s also distributed through embedding, allowing Vimeo videos to play anywhere else on the Web — for example allowing me to include Swingly’s demo video in my article about the question-and-answer startup’s launch.

Right now, if you tried to play Swingly’s embedded video on most mobile devices (except for those with the latest version of Google’s Android operating system), it wouldn’t work, because the video uses Flash technology. Adobe is rolling Flash out to smartphones, but it’s a slow process, and Apple is blocking Flash on the iPhone and iPad. As mobile viewing becomes more important, the current embedding format will seem more and more broken.

Meanwhile, YouTube is experimenting with a new embedding format that will play videos in either Flash or HTML5 depending on browser capabilities.

Vimeo, which is owned by media company IAC, also announced a new Watch Later feature, which allows users to bookmark videos for future viewing. Watch Later sounds most interesting when used across devices, so that someone could start watching a video on their computer, then continue it on their television in the Vimeo channel in the Roku set-top box, and finally finish it on Vimeo’s mobile website.