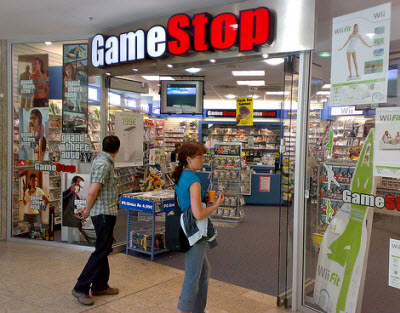 GameStop, the world’s biggest video game retailer, missed its earnings target by a penny a share today. But its performance wasn’t as weak as the overall video game business because the chain is growing its market share and is selling more and more used games. The company’s stock price is down 7.85 percent to $19.13 a share, largely because of a disappointing forecast for the second half of the year.

So far this year, Grapevine, Texas-based GameStop has added a net total of 99 new stores, giving it a total of 6,549 stores in 17 countries. The company thus continues to expand its retail presence even as rivals such as OnLive launch digital distribution of games. GameStop is making its move into digital distribution and online games as well, but the vast majority of its revenues still come from brick-and-mortar stores. About 36.9 percent of sales are new games, but used games are now 31.4 percent of sales. Used games also account for the biggest profits.

The question for this company remains whether it will become the next Hollywood Video, the video-rental business that has shut more than 2,000 stores and laid off more than 19,000 employees as rivals such as Netflix and Hulu have cut demand for physical disks. GameStop has dealt with that threat by buying Kongregate, an indie online game portal, and acquiring Jolt Online Gaming, a maker of free-to-play online games, where users play for free but pay money for virtual goods. GameStop has advantages in the online world, it says, because it can use its stores, which attract 500 million visitors a year, to direct gamers to its online sites.

GameStop has also increased its focus on used-game sales. While that’s a strong business, it has angered game publishers, who are motivated to cut GameStop out of the picture by distributing more games online. Publishers such as Electronic Arts have also responded by charging used-game players for online access in some games. But GameStop said only 25 percent of used gamers bother to play online. Rivals such as Wal-Mart, Best Buy, and Amazon.com have been expanding used-game sales, but so far GameStop says it hasn’t seen much impact from them.

Comparable store sales were up 0.9 percent, partly because of the launch of Microsoft’s slimmer Xbox 360 game console in June. Market share gains led to a 5.3 percent increase in new game sales.

The company lowered its third fiscal quarter guidance, with earnings per share targeted at 35 cents a share to 38 cents, short of analyst estimates of 39 cents a share. The earnings are expected to be lower due to expenses related to the PowerUp Rewards program launch. Same-store sales are expected to be up 3 percent to 6 percent because of strong expected game sales in the second half during the traditional busy season.

GameStop CEO J. Paul Raines said the company saw growth in revenues and earnings despite a volatile global economy. Operations in the U.S. were strong, even though year-to-date U.S. retail sales are down 8 percent compared to a year ago for the overall industry, according to NPD Group. Dan DeMatteo, executive chairman, said the company had outstanding initial results from PowerUp, a new customer loyalty program, and from sales of downloadable content in stores. The company will thus accelerate the roll-out of both programs nationally in the third quarter.