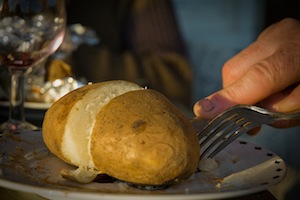 Location-based startup Hot Potato just announced that it has been purchased by Facebook, confirming acquisition rumors from last month.

After TechCrunch first reported that a deal was in the works, Silicon Alley Insider and All Things Digital said the price was $10 – $15 million. Hot Potato didn’t share any details about the deal in its blog post. The company raised $1.42 million from RRE Ventures and other angels, including longtime Facebook senior platform manager Dave Morin, Ron Conway, and Chris Dixon.

Hot Potato was also vague about what this deal might mean for Facebook Places, the location check-in service unveiled on Wednesday. It only says that “some of the features and thinking behind Hot Potato are going to be exposed to a much larger audience.”

One of the differences between Hot Potato and other check-in services is that with Hot Potato, users don’t just check-in to physical locations, but also into events and activities. Facebook Places doesn’t offer anything like that right now, but that seems like one way the company could connect Places with existing features like Facebook Pages. At the same time, Facebook may be more interested in hiring a smart team with check-in experience than in acquiring any specific technology.

Hot Potato says it will shut down and delete all user data in about a month. I emailed Facebook for more details, and a company spokesman sent the following comment:

We’re excited to confirm that we recently acquired Hot Potato, a service that helps people socialize around live events and share what they’re doing with friends. We’ve admired for some time how Hot Potato is tackling this space and look forward to working with them to bring Hot Potato innovations to Facebook.