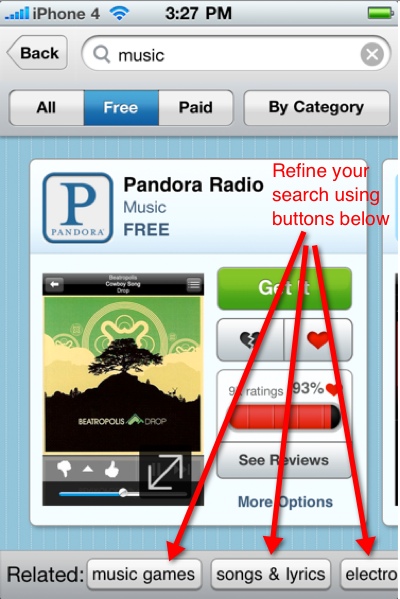 Finally, it looks like searching for apps on your smartphone will go from a terrible experience to a pretty good one.

Chomp, a website that recommends mobile applications, has just launched an app for the iPhone that offers a nifty sort of search engine — one that matches modern mobile browsing habits.

Google’s model of search breaks down in mobile, because Google relies on links to evaluate a Web page’s relevance and credibility. Chomp recognizes that mobile apps built for phones don’t get inbound links, and so throws out that page-ranking approach. Instead, Chomp lets you search for apps with more refined topic categories, and also gives you tips about who else among your friends have rated the apps favorably.

If you’re a typical smartphone user, you’ve probably been stymied when searching for application you want. I have. The experience is awful, because the App Store search engine really only lets you search by keyword. And with more than 250,000 applications to search from, it does a pretty bad job. Either that, or you search the Store by broad category, say “music.” If the app isn’t in the top 25, you’re unlikely to find it.

Or search for “car racing game.” See how Apple struggles with the results. It spits out app names with the word “car” in them. It has no idea you’re looking for a game.

That’s where Chomp comes in. Founder and chief executive Ben Keighran let me play around with the new Chomp app. Query Chomp’s search app for “car racing game,” and you’ll get games about car racing, and you’ll also get references to specific games that have been rated positively by your friends on sites like Facebook and Twitter.

More generally, if you type in “car,” it won’t spit out a random list of apps that have the word “car” in their names. Instead, it will ask you what sort of car app you’re looking for, prompting you with choices such as “navigation,” “mileage”  and other options. Swipe the menu bar to the left, and eventually you’ll actually get an option for “car racing game.”

Chomp launched its initial “recommendation engine” late last year, and has been generating reviews from users. Chomp has 400,000 active monthly users and 50 million recommendations, according to Keighran. It managed this, he says, by working hard to make reviews extremely easy to share: As soon as a user reviews an app, they can post it to Twitter or Facebook with a single button. This puts the review in the activity stream of your friends’ accounts, and so they see the recommendations even if they haven’t downloaded Chomp. (See the video below.) But until now, Chomp hadn’t released a separate search engine.

There’s no doubt Chomp improves on existing search. But the question is whether search is a big enough problem for users that massive numbers will feel compelled to download the app. Soon, Chomp will release an app for Android and other platforms, Keighran says. 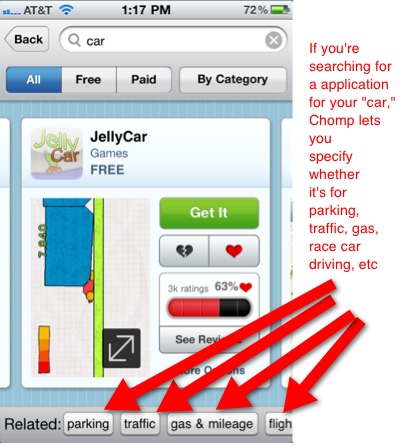 One thing is for sure: Keirgan seems pretty determined to make Chomp relevant. This is his second startup and he says he’s spent a lot more time thinking through where the mobile Web is really headed. His previous company, Bluepulse, was an early player in mobile social networking, but it took too much venture capital and he couldn’t find a business model to match it. This time, he’s also found a credible cofounder for his mission in Cathy Edwards, who has an background in artificial intelligence, which is crucial for the semantic search elements Chomp is pushing.

The app searches for both native applications and HTML5 versions of mobile web sites.

The approach embraces what Keighran says is a sea change in the way people are surfing websites. Particularly on mobile phones, users have less patience for slower moving websites; they hesitate to click on links they fear will take several seconds to render. They prefer native phone apps, and they’re swiping with their fingers more, clicking on buttons and using tab bars to move from page to page. Moreover, these native apps tend to be centralized. Links tend to more often lead to other pages within the app itself, instead of linking off to a browser page.

His belief is that people will consume apps just like they consume music. You might have your favorite bands, and so you’ll listen to the music of these bands regularly, but you’ll also typically hunt for new music on a regular basis. The same thing goes for discovering new apps. You’ll have your core applications that you use daily, but you’ll also want to discover new ones, and there’s currently no good way to do that. By mixing semantic search and personal recommendation from friends, Keighran says he thinks he’s found the answer.