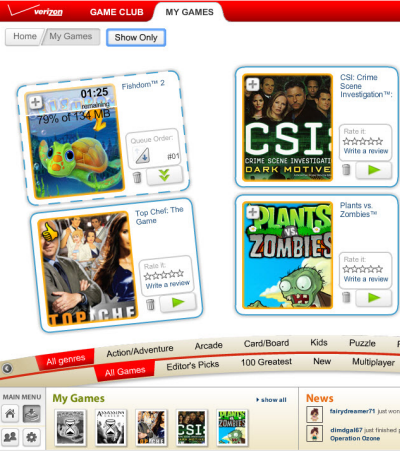 Verizon has teamed up with Exent Technologies to launch a PC game portal that gives users access to more than 1,800 games from 70 publishers.

The Verizon Games with GameTanium desktop application is made possible by Exent’s GameTanium digital distribution technology, which allows users to start playing a game while it downloads the rest of it in the background. Users will be able to play free for a couple of weeks and then have the option of paying $14.99 a month for a subscription to the service. The companies say that with this option, there’s less risk gamers will buy a title they think is good but turns out to be a dud. It’s another example of how big brands, in this case a major phone and broadband service provider, see games as a way to engage more closely with consumers.

Jason Henderson, games product manager at Verizon, said in an interview that early feedback from test gamers has been overwhelming and that 20 – 40 percent are signing up for the service after trying it out. Those gamers are player up to 50 hours a month and are trying out 10 different games during that time. The games include casual titles such as Bejeweled as well as hardcore games such as Assassin’s Creed.

“We’re giving you the ability to access your games all in one place,” Henderson said. “Our model is all you can eat.”

The service is not like server-based game service OnLive, which offers games that are instantly playable from any device. Those games are stored on servers, not on the individual user’s computer. By contrast, users first download Verizon Games app in order to play Verizon Games. That lets them browse through the list of games on the portal. Then they have to download each game they want to play. In that sense, the service resembles Valve’s Steam digital distribution software. But the difference is that users have to pay for each game on Steam, whereas Verizon is giving access to all of its games for one monthly subscription fee. Users who don’t want to sign up also have the option of playing ad-based games for free.

The offering taps Exent’s GameTanium service, which has an easy-to-use navigation interface that is designed to appeal to a mass market audience, not just hardcore gamers. You view games by clicking on an arrow that rotates a carousel sideways, not unlike Apple’s iTunes user interface. Henderson says Verizon Games is targeting all consumers and believes the offering will go well with the company’s FiOS fiber-optic broadband service.

Verizon is trying to get its millions of customers to sign up for the FiOS service, which is so fast it makes game downloading relatively painless. The service has a built-in social network for gamers, who can create their own profile and avatar. The gamers can decorate their own Verizon Games Lounge with virtual items. They can earn trophies and prize points while playing games on the service. Exent handles back-end infrastructure such as billing and payments.

Jason Akel, vice president and general manager of Exent, said that his company worked on the custom game app for Verizon for more than two years. Exent is offering a white-label service that will create a digital game distribution for any brand that wants to jump into gaming. But Verizon will be able to claim that it has the world’s largest catalog of PC downloadable games. More unannounced brands are also planning on using Exent’s service, Akel said. Exent also has its own ad-supported free gaming site, Free Ride Games.

Besides Steam, rivals include casual game sites such as Big Fish Games, Oberon, Wild Tangent and Real Networks’ Game House. But Verizon, which had $107 billion in revenue last year, has lots of money to pour into marketing for the service. It’s conceivable that Verizon could do other kinds of deals, such as partner with mobile phone service provider Verizon Wireless, which it partially owns. But Henderson said there is nothing to talk about yet on that front.

The games-on-demand service is the latest twist for Exent, which started out with a proprietary digital rights management technology company and then moved into an entertainment services business. The company was founded in 1992 and has 120 employees. The company has raised $35 million and is profitable. It has been growing at a compound annual rate of 55 percent since 2004. Investors include Intel, Cisco, Time Warner and New Enterprise Associates.