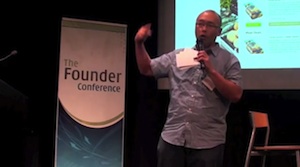 Alain Raynaud is a mentor at TheFunded’s Founder Institute and the founder and chief executive of Fair Software.

Why do other entrepreneurs seem to raise millions without breaking a sweat, while everyone you pitch to never calls you back? Tweaking words on your PowerPoint deck may be a waste of time, if we look at the winning co-founder pitch during the Founder Conference earlier this month.

When Ron Park comes on-stage to pitch GrocerEye, a startup that helps you save on groceries, the odds are not in his favor. Grocery shopping is not exactly a hot topic, especially among the rather tech-focused audience. His slide deck is average at best, with a few vague statements. Even worse, another pitch also targeting food deals features very slick iPhone screenshots and boasts an impressive resume from a “Senior Technologist at Yahoo!”.

Watch the clip below — it’s less than 3 minutes. It starts slowly, but very early, you can feel the confidence in the hip-hop inspired moves. Ron is direct. he exults confidence.

He does a great job of dismissing GroupOn, his obvious competition, in one short punchy sentence: “I don’t know if GroupOn will go out of style, but groceries, never.” Again, that’s confidence.

Does he explain the secret sauce to his startup? No. All he needs to say is: “It’s just a big data entry problem, and I got that locked down.” But the conviction he puts in that statement is worth much more than a lousy attempt at building a technical argument. That’s why when Ron produces that elevator pitch in front of a VC, he will get invited to the meeting.

How can you apply these tips to improve your pitch and your chances of success?

Confidence partly comes from knowing your stuff inside out. You must know everything about your industry, your potential competitors and where they are headed. In other words, become an expert. But that won’t be enough.

You must also appear resolute. Doubt is not permitted, at least not in public. When you pitch, you must project an aura of certainty: your vision will happen and resistance is futile. Practice. Practice again in front of a camera. Watch the results and repeat a hundred times. Really.

Finally, you must genuinely believe in what you are saying. Tricks worthy of a used car salesman will not save the day. You are pitching to highly educated investors and engineers. They detect phony pitches instantly.

That’s why it’s hard: being yourself, while being both aggressive and confident, takes a lot of work. It doesn’t come naturally to most.