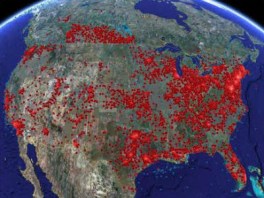 For all the hype and attention location-based services are getting these days, only 1 in 25 Americans have ever tried one, and only 1 out of 100 use them weekly, according to a recent survey by Forrester Research.

What’s the problem? Some people wring their hands about privacy. Others suggest a generation gap is at play. But could the real problem be that we’re just not equipped for location services?

We should be in location’s golden age. Facebook introduced its Places location-based check-in feature, just as Foursquare passed 3 million users with its unlock-your-city game. The survey also found that usage of these services is still dominated by male users (80 percent) and the 20-35 age bracket (70 percent). That’s despite big investment — venture capitalists have put $115 million into location-related startups — and big publicity, like Foursquare’s billboard in Times Square.

As the New York Times reported in its coverage of the survey, privacy remains a barrier to pulling more users into location-based services. Sam Altman, CEO of location startup Loopt, attributes these concerns to a user’s age bracket, stating in the same report that the “magic cut-off age” for user acceptance is “people born after 1981.”

Aside from privacy, another concern stems from the lack of a clearly articulated value proposition for most location services. Game-based location services like MyTown and Scvngr focus on fun. Coupons and rewards are incentives for Yelp and Shopkick users. And friends-and-family oriented services like Loopt and Facebook Places offer the promise of connection. Foursquare and Gowalla offer a combination of all three purported benefits.

The bevy of different rewards and approaches startups in the space have to offer is an encouraging sign — it shows that there is a lot of potential in the concept of location, though the winning approach may still be up for grabs. But the still-low adoption rates raise the question of whether any of them address a truly mass-market need.

One big issue: Most location services require use of a smartphone with GPS and a powerful processor. And as popular as Apple’s iPhone and Google-powered Android phones have proven, they still command less than 6 percent of the global phone market.

Twitter works with any phone that can send a text message. Facebook is available to anyone with a Web browser. Even YouTube can handle just about any cell-phone video. These services were designed around mass accessibility, not an elite device.

As of 2009, Forrester reported around 1 in 6 Americans have a smartphone device, loosely defined. (Many so-called smartphones don’t support the latest location apps.) Given this figure, the fact that roughly 1 in 4 smartphone users have tried a location service and 5 percent of them use one at least weekly is impressive. This also potentially explains why usage is currently mostly dominated by a younger, urban demographic: They are the ones most likely to carry and use a smartphone on a regular basis.

Perhaps the backers of location-based services should rethink their investment plans. Why aim for splashy billboards and sophisticated technical features when the real problem is a lack of potential users? Foursquare and its rivals should figure out a way to subsidize iPhone purchases. That seems easier.