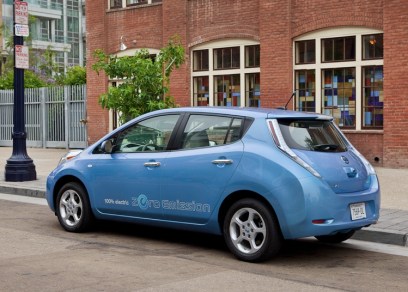 Word on the street is that Nissan will start taking orders tomorrow for the hotly anticipated Leaf, the world’s first mass-produced electric vehicle priced low enough for the general consumer.

The automaker has been accepting reservations for a refundable fee of $99, and already has 18,000 pre-orders, according to John Schilling, Nissan spokesman – with a goal of reaching 20,000 by December. More than half of the reservations are from people in the five states where the Leaf will have its initial rollout.

The rollout will be staggered. The first vehicles will go to drivers in Arizona, Tennessee, California, Washington and Oregon, then in January to Texas and Hawaii. The car maker expects the Leaf to be available everywhere in the U.S. by the end of 2011.

Officially, Nissan declined to comment on the date orders will start, saying only that it “will happen soon,” but it’s being reported that a Washington dealership has posted on Mynissanleaf.com that tomorrow’s the big day.

Dealers are reportedly being instructed on how to convert those reservations into orders, with buyers able to choose options for their vehicles, one of which is a $700 fast-charge option that can recharge your car to 80% capacity in just 30 minutes.

The car is certainly in high demand: car rental heavyweight Hertz plans to offer the Leaf in the U.S. and Europe. The Leaf also has cool features like iPhone integration that will allow owners to check the car’s charging status remotely and adjust the temperature of the car before they hop in.

And with the Chevrolet Volt and Coda sedan set to be released by the end of the year, this may well be The Year of Electric Cars. The Leaf being the first of its kind has already taken some dings from other electric-vehicle makers, notably Elon Musk, CEO of Tesla, who called Nissan’s battery technology comparatively “primitive.” And it’s not clear where the payoff is for consumers: Mitsubishi, which is releasing its own electric car at the end of 2011 – the miEV, told the BBC that electric cars could be more expensive to own than regular gas-based cars due to rapid depreciation and the high cost of replacing the battery once it dies.

The WSJ calls the Leaf “one of the most daring bids for market dominance” in recent history, in part because the actual durability and performance of the car’s battery is uncertain (though, to be fair, the same is true for all electric vehicles). Nissan says it can take the car 100 miles in a single charge (though running the heater or AC will lower that) and has matched the Volt’s eight-year or 100,000-mile warranty. 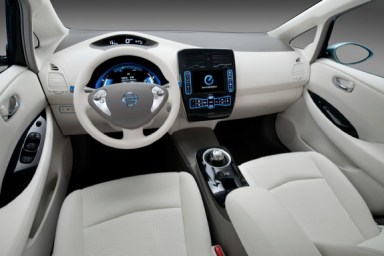 And what kind of driving experience can we expect from the Leaf? You can check out a review from CNBC here.