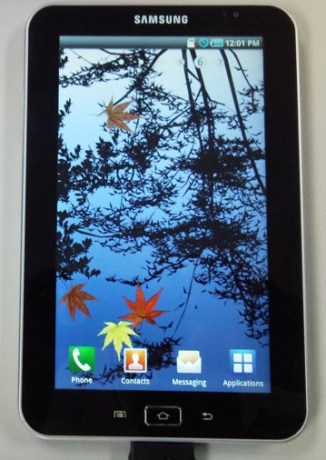 A few weeks ago, we caught wind of Verizon’s Android plans for the fall and early 2011 thanks to a leaked roadmap. In addition to more Droid devices, the roadmap revealed two mysterious Android tablets for the carrier — one from Samsung, and another from Motorola.

Now thanks to updated information from Verizon’s systems, it appears that the shadowy Samsung tablet is in fact the Galaxy Tab, according to the mobile device site Boy Genius Report.

The news isn’t entirely surprising, since the Galaxy Tab has been one of the worst kept tech secrets of the past few months. At this point, we can say for certain that it will be 7-inch tablet running Android 2.2 “Froyo”, and it appears to have a front-facing camera for video conferencing. Test units have popped up all over the world — most recently Engadget reported on a unit that sported a CDMA sticker, making it compatible with Verizon and Sprint’s cellular network.

One of Samsung’s online portals also revealed a slew of accessories for the Galaxy Tab, including a dock with HDMI video and audio ports, as well as a keyboard attachment, and a leather case. That Samsung is readying accessories is a good sign — a decent selection of accessories is usually one of the more compelling reasons to pick up an Apple device like the iPad.

We first caught word of the Galaxy Tab when Samsung revealed its ambitious plans for its Galaxy S Android phones, which are currently available on AT&T and T-Mobile, and are coming soon to Sprint and Verizon. Despite being a latecomer to the Android “superphone” party, Samsung has the potential to be one of the first manufacturers to bring out a compelling Android tablet.

There’s no firm release date for the Galaxy Tab yet, but I would expect more details from Verizon and Samsung soon, and a potential release by November.