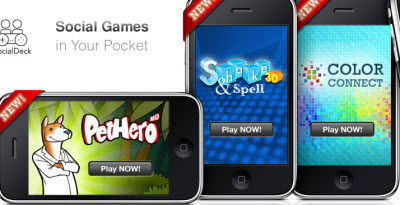 In its effort to challenge Facebook, Google has become a social butterfly. The latest proof of that is Google’s acquisition today of SocialDeck, a maker of social games for mobile phones.

SocialDeck has made games such as Shake & Spell, Color Connect, and Pet Hero. Its games were downloaded about a million times in 2009. The company is based in Waterloo, Ontario. The purchase price wasn’t disclosed.

SocialDeck also makes a cross-platform tool for integrating social content across the BlackBerry, iPhone and Facebook platforms. Shake & Spell, notably, works on all of those platforms.

Google has been acquiring a variety of companies, such as Slide and Jambool, to compete with Facebook in social networking. It has also made a $150 million investment in social game leader Zynga. But SocialDeck’s products seem to line up best with Google’s interests in expanding the Android mobile operating system. Google has appointed Slide founder Max Levchin as its head of social networking.