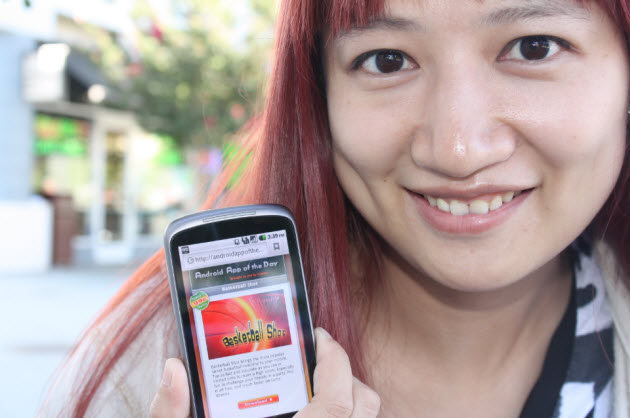 If you thought that getting apps noticed was tough on the iPhone, it’s even harder on Android phones. That’s why PapayaMobile is unveiling its Android App Of The Day, an app-marketing program, today. 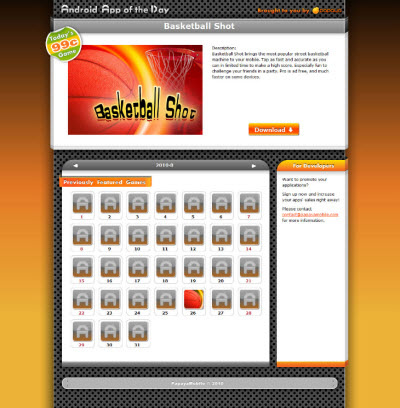 PapayaMobile, the Beijing-based mobile social platform for Android apps, will use it to help Android users sift through the chaff to find cool apps on a daily basis.

Those apps will be featured either for free or at a discounted price of 99 cents for one day only. Such price promotions may not seem earthshaking, but they’re a tried-and-tested way of grabbing attention in other app marketplaces. The first featured app is Basketball Shot, which lets you while away the time playing hoops.

The problem for Android developers is that the top 50 list is the best way to get noticed on Google’s official Android Market. But the top 50 list rarely changes and so it isn’t fluid enough to include the hottest or the coolest new games that are just getting started. As a result, many phone makers in places such as China are creating their own secondary app stores with more ways to get apps discovered.

“It’s a worldwide problem, though it’s bigger in Asia because that is where the phones are selling,” said PapayaMobile chief executive Si Shen in an interview. “We did this because we found that it was hard to get our own apps discovered.”

PapayaMobile started as an app maker. It has since created a platform that can be used to add social features such as sharing, leaderboards or challenges to games, in the hopes that those will make friends more likely to tell friends about the app. The company competes with rivals such as Aurora Feint and Scoreloop.

Shen said that the focus for PapayaMobile’s App of the Day is quality. To be eligible, developers have to use PapayaMobile’s software development kit, which gives the developers access to a network of more than 4 million Android users who are fans of apps in PapayaMobile’s network. The company expects to see developers from around the globe participate in the program.

Most of the apps will be 99 cents, unless they do not require a download, in which case they can be offered for free. (That’s a restriction on the Android Market). Apps can also be offered for free if they are downloaded from a website and not directly from the Android Market. Developers can submit their apps for free if they enroll in the program by September 12. At some point in the future, developers may have to bid to be included in the offer.

In theory, once an app is featured, it can see a lot of traffic in one day and then spread in a viral fashion through word of mouth. Companies such as RockYou are seeing good results with “deal of the day” programs on Facebook, while Aurora Feint does something similar for the iPhone, so this effort might also do well.

Shen, a former mobile product manager for Google in China, started PapayaMobile in 2008 with Wenjie Qian. The company has 30 employees and it raised $4 million in funding from DCM.