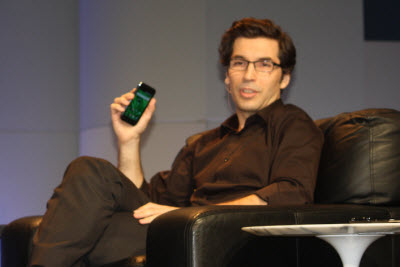 Samsung said today that it will let you control apps on your web-connected Samsung TV with the company’s latest smartphone.

Samsung is moving aggressively to market its web-connected TVs and believes that its Samsung TV apps will help differentiate its products from rivals, much like Apple’s App Store sets apart the iPhone. So the South Korean electronics giant is emphasizing the fact that the same apps can run across various Samsung devices and that those devices can interact with each other when it comes to the control of apps.

You can sit on your couch and use the Samsung Galaxy S smartphone as a remote control for apps on a connected TV. Oliver Manuel, director of content at Samsung, said at the company’s TV app developer event that the smartphone is another option for controlling apps on a TV, in addition to the remote control. 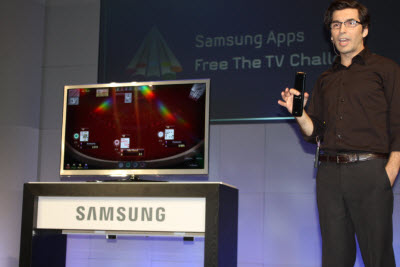 The good thing about the smartphone control is that it has a touchscreen. That user interface may be far more approviate for apps such as games, compared to a remote control with buttons. You can also imagine apps that take advantage of the second screen, said Tim Baxter, president of Samsung Electronics America, in an interview. He said that it could be possible to display the card table in a Texas Hold ’em game (pictured). Then each player could peek at their own cards by looking at their phone screens.

Samsung announced its app platform in January and expects to have 200 TV apps by the end of the year. In a demo of the TV apps, Manuel showed how consumers can easily navigate through app screens using the remote. He showed how you can see a news ticker roll across the bottom of the screen. If you click on it with the remote, it can blow-up and occupy half the screen, but the TV show you’re watching will still play in a window on the left side of the screen.