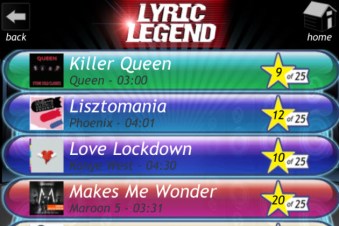 TuneWiki is taking on a tough task of trying to be an innovator in music games, which has been dominated by titles such as Guitar Hero, Rock Band, and Tap Tap Revenge. The company’s latest effort is Lyric Legend, an original game for the iPhone that tests your ability to remember lyrics.

The iPhone game from the Santa Monica, Calif.-based company is aimed at enabling players to discover new music, learn the words to songs, and interact socially. It’s a clever game, and could be as hot as the company’s first product, called TuneWiki Social Music Player, which provides lyrics to songs as they are playing.

That one is played by 4 million monthly unique users and has been downloaded more than 6 million times. TuneWiki will promote its new app to that big base of users. 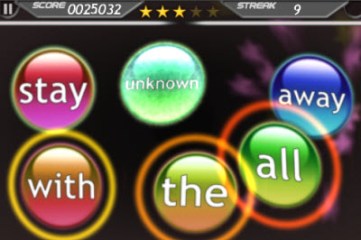 To play the game, you select from dozens of well-known songs. As the song plays, little orbs appear, each with a single word from the lyrics of the song that are playing at that moment. You have to tap the screen, hitting the words as they are being sung. I tried it out and it really tests your ability to keep up, since you’re doing a few things at once: listening to the song, remembering the lyrics, and tapping the screen. As you progress, the game gets harder and harder. It takes getting used to but isn’t so hard once you learn it.

The game comes pre-loaded with three free songs from The All-American Rejects, Metric, and Vampire Weekend. TuneWiki has secured the rights to 70 songs from the major labels in an effort to come up with songs that most people know. Artists include Coldplay, The Jackson 5, Kanye West, Miley Cyrus, No Doubt, Owl City, Queen, Rihanna, Taio Cruz and more. More hits will be added over time. The game has five levels of difficulty, and you can compete with up to four friends using Bluetooth multiplayer mode. You can challenge others through Facebook, Twitter or email and see your rank compared to others around the world, country, state, or city.

The game is a free download. But if you want to download more songs, you can buy two songs for 99 cents. I tried out Elton John’s Crocodile Rock, which moved way too fast for me. But I was surprised to learn I really didn’t know the lyrics to the song from the 1970s as well as I thought I did. This is one of just 250,000-plus apps in the App Store, but it’s worth noting because it’s an original title. Michael Steiner, director of product at TuneWiki, says the game is targeted at both casual and hardcore game players.

Larry Goldberg, president and chief operating officer of TuneWiki, says TuneWiki is focused on social music. The company’s previous title, the TuneWiki Social Music Player, provides timed subtitles with song lyrics that are in sync with the music that you’re listening to on your iPhone or iPod Touch. That title can translate lyrics into 40 different languages. Overall, both titles are part of the company’s platform for music engagement.

TuneWiki was founded in 2007 by Rani Cohen and Amnon Sarig. It has 40 employees. Rivals include Tapulous, which was purchased by Disney earlier this year. Tapulous makes the Tap Tap Revenge series of music games. In the next four or five months, TuneWiki will be releasing more titles and new features. The company has raised $7 million in a second round from investors that include Benchmark Israel, Motorola Ventures, DOCOMO Capital Inc., SanDisk, Intellect Capital Ventures (a venture fund initiative of TeliaSonera), HillsVen Capital and Novel TMT.