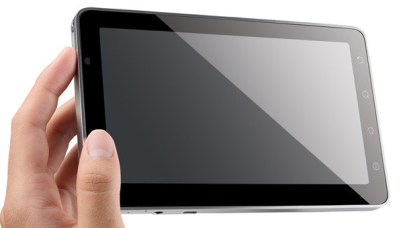 As a company most famous for its monitors, ViewSonic probably isn’t the first company that you’d expect to release an Android tablet. The company’s European arm today announced the ViewPad 7, a 7-inch tablet running Android 2.2, the version also known as Froyo.

Then again, with its recent stabs at all-in-one computers and digital photo frames, perhaps a ViewSonic tablet isn’t that out of the ordinary.

The ViewPad is also equipped with front and rear cameras (at VGA and 3-megapixel resolutions respectively) for video conferencing, and 3G capabilities with space for a SIM card.

The device is actually a rebranded version of a tablet called the “OlivePad,” Engadget notes. It made news months ago as “India’s first 3.5G Pad”, and was notable for its lackluster hardware — which included a 600 megahertz processor and an 800-by-480 resolution display (the same as Android phones with smaller 4-inch screens).

Simply put, the ViewPad 7 isn’t going to be an iPad killer, but it will help ViewSonic find a role in the tablet market. It’s not a wholly original stab at the Android tablet market like Samsung’s Galaxy Tab, but if priced low enough, it could find a few fans.

There’s no word on worldwide or North American availability of the ViewPad 7 yet. Viewsonic Europe says that it will be priced “no more than £350” ($543) in the UK, and it expects review units to be available in October.