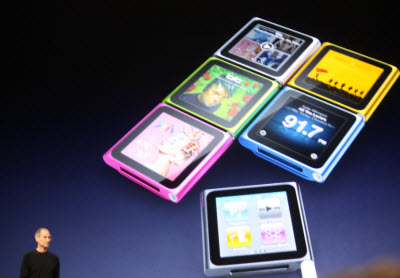 So Apple made some news today. Specifically, chief executive Steve Jobs took the stage in San Francisco, where he showed off major upgrades to the company’s music and TV services.

As happens on anytime Apple holds a press event, there was a flood of coverage, both on VentureBeat and elsewhere. To help you sort through it all, here’s a roundup of all the Apple-related stories we published today. The list starts with the big product news, followed by videos and analysis.

Apple launches Ping, a social network for music — Apple revealed a number of upgrades to its music and media service, iTunes. Most importantly, it’s giving iTunes a social layer.

Steve Jobs shows off $99 version of Apple TV with Netflix streaming — And for his “one more thing,” Jobs showed off a new version of Apple TV. The device plays movies on your TV and is one fourth the size of the original version, and it can stream movies from the Netflix movie service.

Mobile developer Smule: Ping sounds great — what about app suggestions? — It’s no surprise that Ge Wang, cofounder and chief technology officer of music app-maker Smule, sounds excited about Ping. But Wang said he sees greater potential in what Apple might do with Ping in the future.

Apple TV is the one you date, Google TV is the one you marry — VentureBeat’s Devindra Hardawar said he’s disappointed with Apple TV: Instead of being a revolutionary upgrade, the new device is just a smaller and cheaper iteration on what Apple has done before.

Apple’s iTunes-only Ping socializes your music with elements of Facebook (video demo) — Here’s a video demo of Ping in action.

Why Apple’s Ping is about cutting out the social middleman — What’s exciting about Ping? It’s a social network based around content and consumption, not status and comments.

And here’s our photo gallery of Apple’s visual feast today. Lastly, here’s a link to a video of Chris Martin, the lead singer of Coldplay, singing one of his piano solo songs at the close of the event.