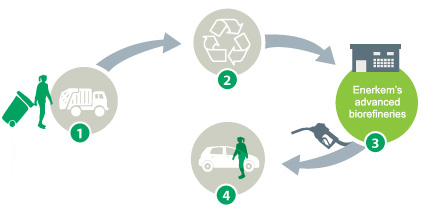 Enerkem, a Montreal-based company which specializes in converting garbage into biofuel, just broke ground on a new plant in Edmonton, Canada. According to the company, this is the world’s first plant of industrial size to use non-recyclable municipal waste, which would otherwise end up in landfill, to produce advanced biofuels.

The resulting ethanol will be used to dilute the gasoline used to run cars and help meet the renewable fuels standards of the Canadian federal government and the province of Alberta which both call for a 5 percent ethanol content in gasoline. A conventional car can run on up to a 10 percent ethanol blend.

The Edmonton plant can produce 10 million gallons a year, which is sufficient to fuel 400,000 cars on the ethanol-gasoline blend, and will convert 100,000 tonnes of municipal waste per year. The city has a target to divert 90 per cent of residential waste from landfill by 2013. Largely through recycling, it currently diverts 60 percent of its waste. The plant should be operational in 2011.

Currently, 64 percent of municipal waste in the United States, which consists of materials like paper, glass, metals, household plastics, wood,  food scraps, rubber, textiles, and so on ends up in landfill. Even materials not suitable for traditional recycling contain carbon molecules which can be chemically recycled, although some pre-sorting is required.

Enerkem extracts the carbon residues and converts them into transportation fuel and other useful chemicals using a combination of heat, pressure and chemical catalysts.Water and inert materials are produced during the process. The inert material can be used as construction aggregate. Enerkem told me that based on independent full life-cycle analyses, the process reduces green house gas emissions by 80 percent compared to the combined emissions of the replaced gasoline and waste landfill.

Enerkem has planned another biofuel plant using waste at Pontotoc, Mississippi. This will have a similar capacity and feedstock to the Edmonton plant and is expected to be operational by 2013.

Earlier this year Enerkem landed $51 million in funding from a combination of sources including Waste Management of Houston. The company was founded in 2000 and has 80 employees.