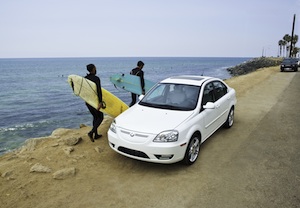 Coda announced today their plans to roll out their all-electric sedan in Hawaii in the third quarter of 2011, positioning the car to battle the Nissan Leaf in a market that suffers from the highest gas prices in the country.

In May, Nissan singled out Hawaii as a target market –- the state will be among the first to get the Leaf next year. The Coda is set to hit the U.S. market at the end of this year, the same time the Chevrolet Volt and Nissan Leaf will arrive.

“They have a great opportunity in front of them. At least for the next 18 months to 24 months there’s going to be a very limited supply of both the Volts and Leafs, so I think there will be customers hungry for those vehicles … and would strongly consider Coda,” said John Gartner, analyst for Pike Research.

Hawaii is a prime market for electric vehicles, thanks to short driving distances and a strong commitment to renewable energy. Their current governor launched the Clean Energy Initiative, which aims towards 70 percent clean energy usage by 2030.

Hawaii is also one of the first states to partner with Better Place, a company that has brought electric vehicle infrastructure, charging stations and in some cases electric cars themselves to countries like Israel, Denmark and Australia.

The state’s deal with Better Place should yield stations where EV drivers can exchange their depleted car battery for a charged one. And with islands that are short in circumference, “range anxiety” is less of an issue.

The Coda sedan itself seats five, and the company says its lithium-ion battery system has 40 percent more usable energy than any other EV in its class, with a range of 120 miles.