Twitter CEO Ev Williams posted a blog entry Thursday with an update on the microblogging service’s usage, which continues to grow sharply. More interesting than the numbers, though, was the message written between the lines: Twitter now has 145 million monthly users, and for the marketers who want to reach them, Twitter is the only way to go.

The passive-aggressive blog post is a Silicon Valley art form, and Williams, who helped push blogging into the mainstream with his earlier startup, Blogger, is surely a master of the medium. A chart Williams includes (pictured below, with a few annotations from yours truly) tells the story: After Twitter introduced its own iPhone and BlackBerry apps, on top of its own website, SMS, and mobile Web versions, it now controls the top five most popular ways people access Twitter. No third-party app amounts to more than 4 percent of Twitter’s audience — and the most popular of those is TwitPic, a photo-sharing service. 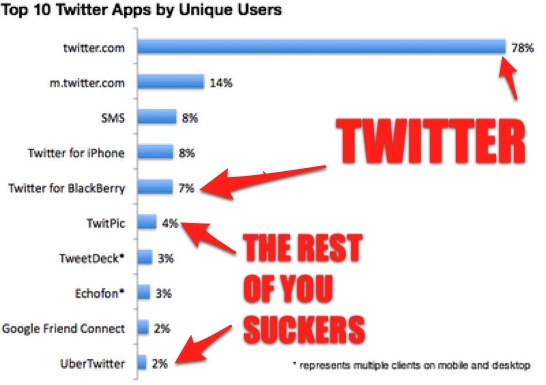 “You’ll also note that third-party clients continue to play an important role for many people,” Williams writes in the most anodyne of tones. He gives a nod to services like TweetDeck, which power-user social-media marketers adore for pumping out their endless messages to followers. And 300,000 apps connect to Twitter using a technology called OAuth, which allows them to broadcast messages through the service. Foursquare, the fast-growing location-based check-in service, is a notable example; users can announce to their friends on Twitter when they arrive at a venue.

But those followers, by and large, are getting those messages on Twitter.com, which is used by 78 percent of Twitter’s audience. One in seven are going to Twitter’s own mobile website. And Twitter’s text-messaging service still reaches a bigger audience than users of Twitter’s iPhone or BlackBerry apps.

The real question is who Williams wrote this blog post for.

One possible audience: Twitter’s developers, who continue to be restive after Twitter moved to buy the leading iPhone app, Tweetie, and announced its intentions to take over key functions currently provided by third parties, like TweetMeme’s button for publishers to share stories on Twitter, now rendered outmoded by an official Twitter sharing button. By sharing these statistics, Williams effectively puts them in their place, reminding them that while they may still have their uses, they don’t drive Twitter’s value anymore. Twitter’s a casino, and while a few developers may make money, the house always wins.

The other audience: Would-be acquirers. Google Friend Connect, a technology used by the search giant to link its properties to other Web services is mentioned as a third-party app. But it only counts for 2 percent of Twitter’s audience. If Google wants to get Twitter’s juice, in other words, they can’t just hook up to its servers. They’ve got to get serious.

But Google desperately wants to counter Facebook in social media. Twitter’s the only player with a meaningful social network anywhere near Facebook’s scale. If Google’s long-rumored Google Me social product doesn’t pan out, if its shopping spree of social acquisitions doesn’t coalesce into a coherent strategy, will buying Twitter be its Plan B?

Williams, who sold his Blogger to Google, surely knows how this game is played. Consider his post just another smart move.