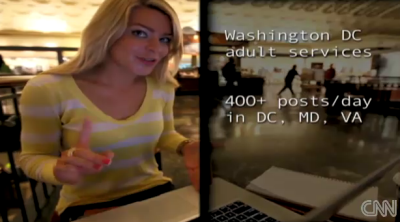 Evidently caving to pressure from law enforcement and politicians, online ad site Craigslist has taken down the Adult Services section of its site.

The adult services section has now been replaced by a black and white “censored” word, which cannot be clicked upon.

With that one word, pictured below, Craigslist is clearly making a statement. But in shutting the section down it is also proving that it cannot operate a business that is outside the cultural norms of its opponents.

Craigslist has been at the center of a huge debate about online prostitution and has been under pressure from the press, politicians and law enforcement to curtail what are obvious solicitations for paid sex services on its site. Craigslist has been attacked by state attorneys general for refusing to remove the section entirely. 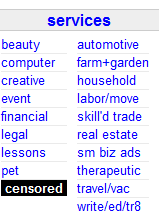 Craig Newmark, founder of the site, was even ambushed in an Aug. 13 interview by CNN reporter Amber Lyon (pictured above), who asked him what Craigslist was doing to protect young girls who advertised in the adult services section of the site. She told him that a number of child protection advocates have told her that Craigslist is the “Wal-mart of child sex trafficking.” Under further questioning, Newmark stared at her and referred Lyon to the company’s blog.

Lyon put Newmark on the spot, saying he was the “Craig in Craigslist” and was responsible. In a subsequent blog post, Newmark said that Jim Buckmaster, chief executive, has been running the site for the last 10 years and that his role is as a customer service rep. Newmark said he should have just referred Lyon to Buckmaster, but, instead, he froze on camera and looked “uncaring.” CNN aired the piece dozens of times. Buckmaster, meanwhile, lashed out at Lyon and wrote how Craigslist was trying to do the right thing, manually screening ads in its adult services site since May, 2009. It has also pointed out how similar ads on eBay go unnoticed.

“I know our folks have worked very hard to identify and do the right thing with legitimate versus illegitimate adult service ads,” he said. “From what I can tell, that’s a lot more difficult to do perfectly than is being portrayed by CNN and other media.”

The adult services section has been removed only in the U.S.