Multiplayer titles can't seem to hold my attention for too long these days unless they have some sort of progressional unlock and rank system, for addictive stat whoring. Then those communities following those games die out. Yet there are exceptions, and Team Fortress 2 is a prominent and shining example of this. It's still being played very Heavy-ly internationally and is STILL updated by the developers three years after release. This is the re-telling of my first fifty hours of gameplay. All these timeframes can vary depending on the player. 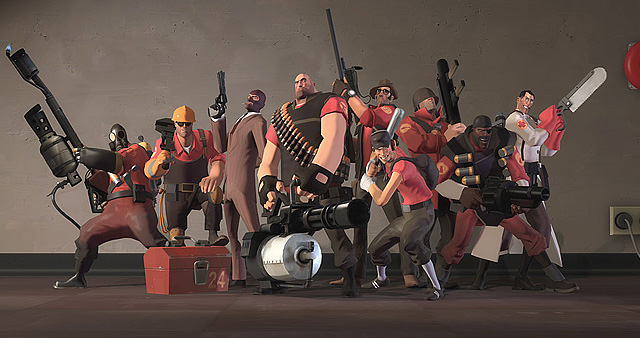 I'm going to be honest, if you plan on playing Team Fortress 2 straight out of the gate, prepare to die. A lot. My first ten hours consisted of constantly failing to help out my team, followed by losses, followed by lots of death. Regardless, it was FUN. Normally dying and losing causes rage in shooters like Bad Company 2 or Modern Warfare 2.

It doesn't matter whether you win or lose in Team Fortress 2. it's just great fun experimenting with all of the nine classes, finding out their uses naturally and playing to develop a feel for each class and later decide which class you like the most. 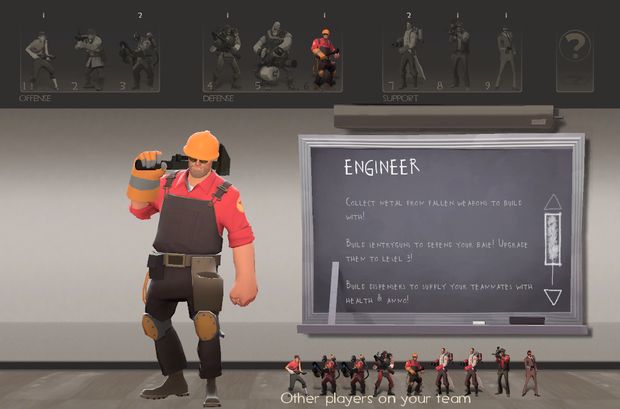 In 10 hours I also take in the great sound design. The awesome voice-acting, the believable weapon sounds despite being in a zany cartoon-style shooter all go hand-in-hand with the graphical style of the game. Now I understand why there are internet memes dedicated to this game now.

The next 10 hours are spent getting used to every nook and cranny for each map and the phases of each map, as well as the game-types. There are 3 game-types in Team Fortress 2; Capture Point,Arena and Payload.

Capture Point has Attackers rushing on parts of the map to control them as territory, as the Defending team has to do their best to maintain control over all the points and run the clock to zero before their last point is taken. It's a frantic game-type from beginning to end, as the points become progressively easier to capture, and time is added on for each capture. Each Capture Point map spans several phases, switching Attack and Defend roles every once in a while and it also has different variations of the game-type. For example, some maps are tug-of-war style matches where both team attempt to capture and hold all the points at the same time to win, and other maps are simply Attack and Defend affairs.

Arena mode is a slice of Counter-Strike in Team Fortress 2. Players are given one life and one life only each round, and there is time running on the clock. It keeps you on your toes as your team truly comes together to operate as one unit, since time is running so you have to move fast to eliminate the opposing team. On top of that, after a set amount of time, a single capture point in the middle of the map is unlocked and can be captured to win the round. This presents two ways to win an Arena match and is highly addictive.

Payload is another Attack/Defend gametype, but with the Attackers pushing a cart with a massive warhead attached to it over points to instantly capture them. The final point of each Payload match is the Defending team's base, which when captured will detonate the Payload Cart and bring victory to the Attackers. The Defenders in Payload act much like Capture Point, they just have to defend and run the clock to zero before all the points are captured, but the clock time increases after each point is taken. 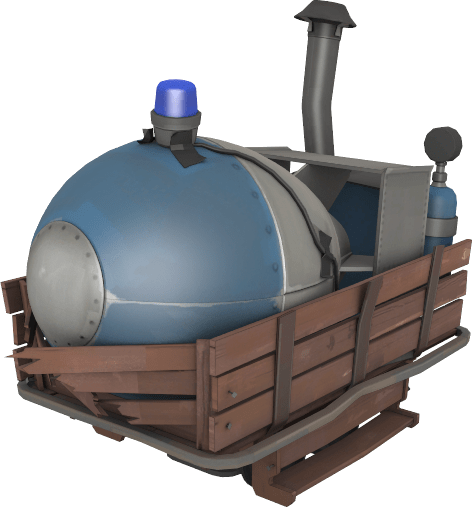 You also might even already have a few items at this point, and these are typically weapons. You can investigate these weapons in a load-out menu or your backpack viewer at the main menu, and find out the pros and cons. This leads to further experimenting with load-out combinations. At this point I'm starting to get better at this game with a few classes, and starting to break away from the rest of the classes that I'm not good at.

The maps begin to feel like a routine, but the players are never the same so there's always bound to be some sort of curveball based on the classes the enemies are playing, and the varying skill of each person. It's really starting to grow, and I can feel the addiction beginning to sink in.

By now, I've already got a bunch of items, and have figured out their purposes and made my own combinations of these items for my class load-outs. But wait! I've got more item duplicates than I have kills (I kid, I kid, I'm not that bad!) What am I supposed to do with them? Well, the backpack menu has a Discard button. Do I use that? It seems like a waste. But wait once more! There's another option, and it's called Crafting!

Crafting is a whole other layer of depth and replay added to Team Fortress 2. Crafting essentially allows you to fuse items and get new ones. It can be utilized for getting additional items you don't already have, to complete your collection of weapons. They can also be used to craft duplicate items together to get Scrap Metals. When you fuse enough Scraps, you'll get higher level metals, and those higher level metals fuse to get- wait for it- hats! What's that you say? That's pointless? Wrong. Hats are rare to come-by in TF2 and is a symbol of status. Not only does it take lots of time and items to craft together a hat, but the chances of getting one randomly in-game is extremely slim, so most of the people with hats have played for quite a while. it's motivation to keep playing, apart from the great competitive team-based action, of course. 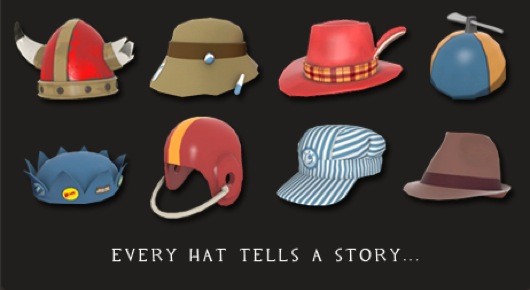 I've gone mad for hats. Ever since I've learned about crafting, I've played with item management in mind, hoping to get that next Scrap Metal to get one baby step closer to crafting myself a hat. I can taste it already.

Well, I have other hats, but it's just not the same. The Ghastly Gibus is a crooked top-hat that can be earned by killing someone who is wearing it in-game. Statistically, 95% of the TF2 community has the hat already. I won't be different wearing that. There's also the Alien Swarm Parasite hat, which can be earned by playing 2 co-op matches of Alien Swarm in a row. It's easily earned, but while it looks cool, it's just not the same as having a sweet fireman's hat for my Pyro, or a barbaric viking's helm for my Soldier. The addiction settles in. I'm loving every moment of this, and the incentive to keep playing other than the fun factor is increased by the promise of hats, and the over 300 achievements. It feels truly rewarding and satisfying, despite not having ranks (it does have stats though, it's a motive to improve.)

Playing with friends adds to the co-operative teamplay of Team Fortress 2, and it's just great gameplay. It's fun, and balanced if you know where to go and what you're doing. I'm absolutely hooked on this, and it's not perfectly understandable to me how there is such a thriving community for TF2 and how it's still being updated by demand- it's just a very well designed game.