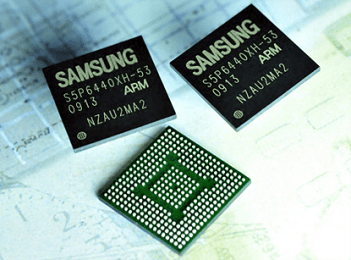 Samsung already has a plenty powerful mobile CPU with its Hummingbird processor — the brains behind its Android-powered Galaxy S line of phones — but today the company has announced it has even bigger plans for next year: A low-powered dual-core processor, dubbed Orion, with powerful 3D and video capabilities.

The processor combines two ARM Cortex A9 cores running at 1 gigahertz to create a computing powerhouse. Samsung says it provides 5 times the 3D performance of the Hummingbird processor, enough power to record and decode 1080 high-definition video, as well as the ability to power three displays. A manufacturer could use the chip to create a device with two screens, and it would still have enough power left over to send video to a computer monitor or HDTV via its built-in HDMI connection.

Orion is built with Samsung’s 45-nanometer low-power processor technology, meaning that it won’t drain battery life even though it’s packing a healthy amount of horsepower.

Samsung isn’t the only mobile chip-maker with dual-core plans. Intel is looking to finally get a piece of the smartphone pie with its new dual-core Atom processors, and Qualcomm is also working on a dual-core version of its popular Snapdragon mobile processor.

The move towards dual-core processors will make mobile devices significantly more powerful than they can be if restricted to a single CPU core. The challenge for chip manufacturers will be balancing the more powerful hardware with battery life concerns.

Samsung says its Orion processor will be available to a few customers later this year, and it will started building the chips en masse in the first half of 2011.