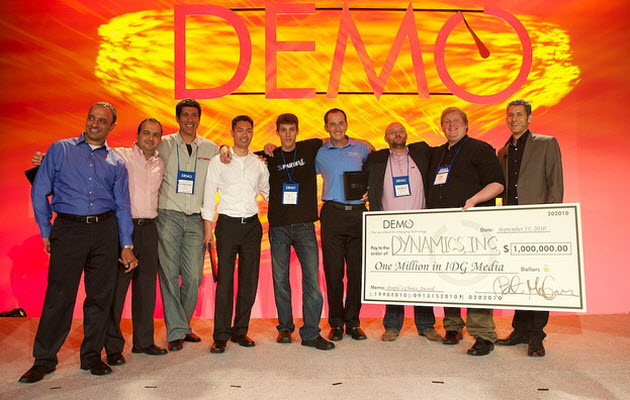 More than 70 companies hit the big stage at DEMO Fall 2010, co-produced by IDG and VentureBeat. Pictured above are this year’s DEMOgods, with representatives from Veebeam, VoiceBase, Particle Code, Delphix, and Alpha company winner Ether 2. Dynamics (CEO Jeff Mullen pictured with check) won the $1 million People’s Choice DEMO prize. [Photo above by Stephen Brashear/New Media Synergy]. More photo highlights from the event follow below. And you can find the full set of official DEMO pictures here. 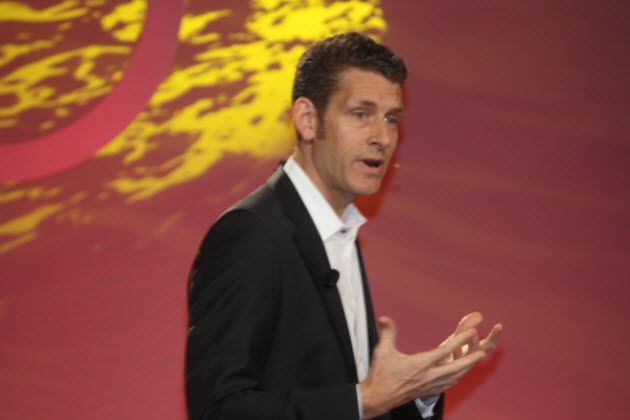 Matt Marshall, chief executive of VentureBeat and executive producer of DEMO, opened the day talking about … his date with a woman who showed him her virtual farm. He talked about the trends toward mobility, social media, e-commerce and cloud computing. 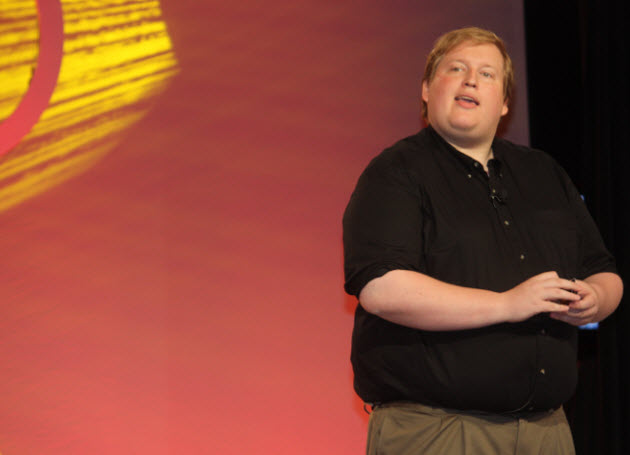 Jeff Mullen of Dynamics has worked for years to bring the plastic magstripe credit card into the 21st century. With Card 2.0, he showed off a credit card that could change its numbers after a user presses a button. Alternately, the card will display its full set of numbers only after the user enters a pin code on buttons on the surface of the card. 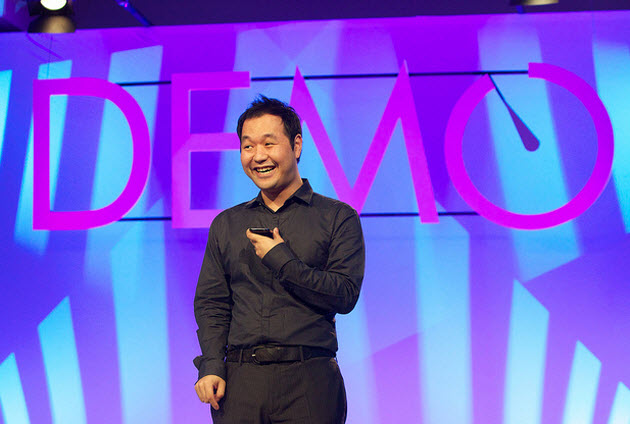 This fellow, John Kwag from Touchring, pretended to take a call from his mother during his demo. His service lets you call your friends on your social networks, even if you don’t know their phone numbers. [Photo by Stephen Brashear/New Media Synergy] 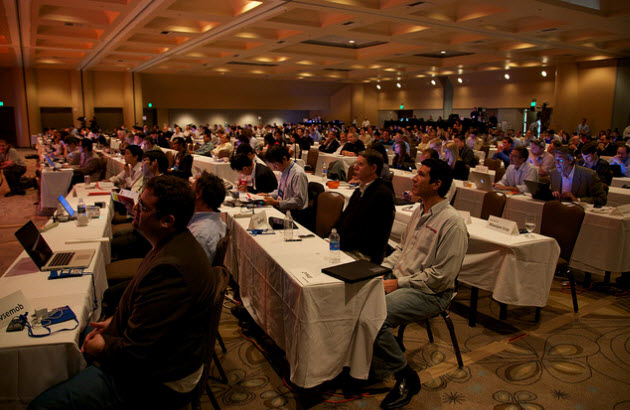 The 20th annual DEMO conference returned to Silicon Valley, at the Hyatt hotel in Santa Clara, Calif. That location turned out to be a big draw for the crowd. [Photo by Richard Brown] 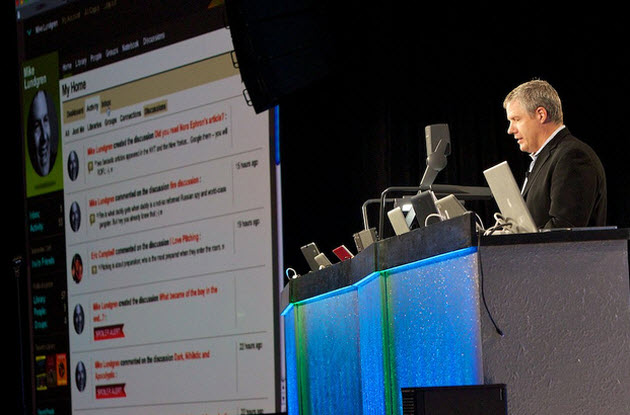 An army of laptops were available for the presenters to walk up to and operate during their demos. [Photo by Stephen Brashear/New Media Synergy] 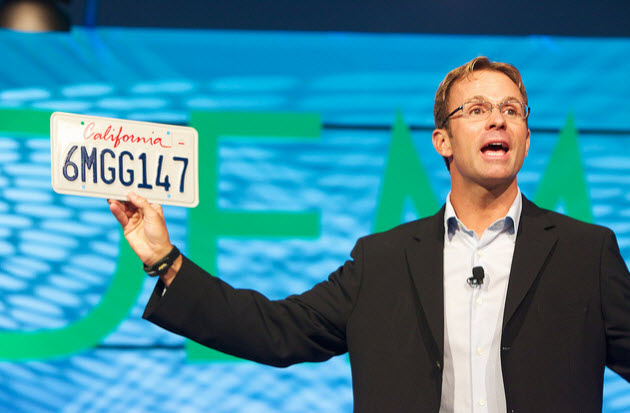 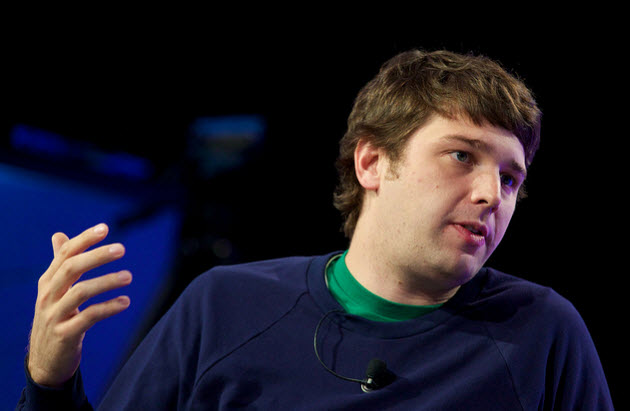 Andrew Mason, founder of Groupon, is sitting on a valuation above $1 billion. He talked with VentureBeat executive editor Owen Thomas about how the company is generating big results for small businesses with local deals. [Photo by Stephen Brashear/New Media Synergy] 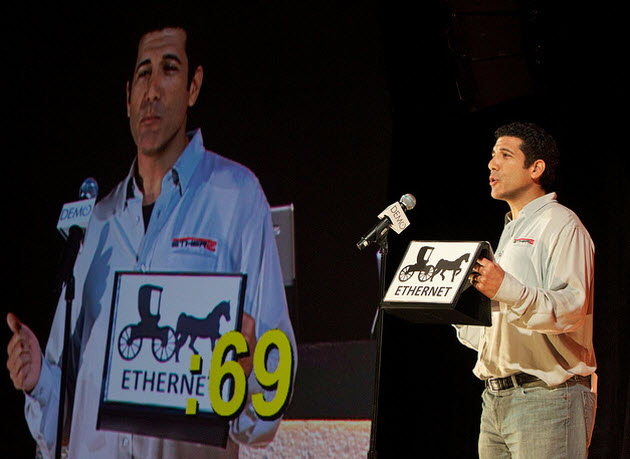 Alpha pitch companies had 90 seconds to talk about their early-stage ideas for companies. Ether2 (pictured), which seeks to replace the aging Ethernet protocol with something faster and more reliable, was voted the best Alpha pitch company. [Photo by Stephen Brashear/New Media Synergy]. 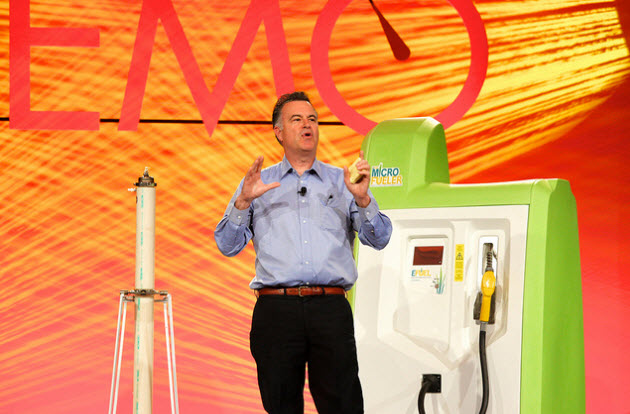 Thomas Quinn of E-Fuel Corp. had the best prop of all of the presenters. He showed off MicroFueler, a portable organic waste conversion ethanol system. The company calls it an “organic waste reactor.”  [Photo by Richard Brown] 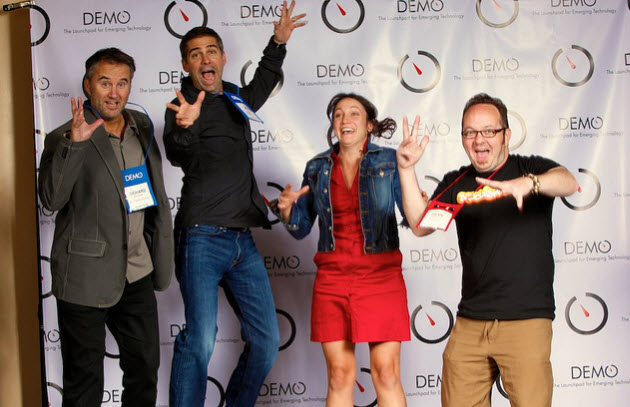 It’s stressful doing DEMO talks where you give your message to movers and shakers in just six minutes on stage.
That’s why there’s the DEMO After Dark party, where people can let off steam. [Photo by Richard Brown] 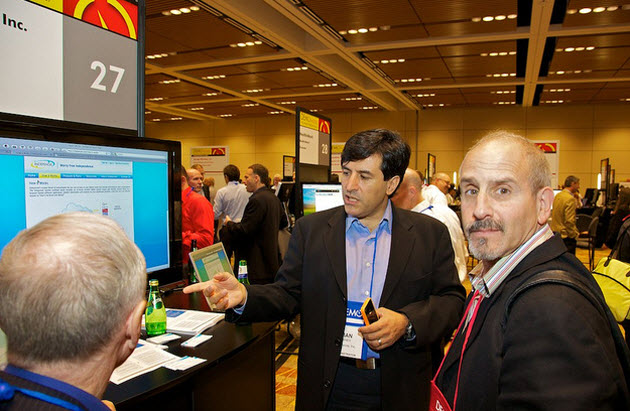 Ed Baig (right) of USA Today is one of the journalists who can make or break a product. He is a long time DEMO veteran, but it looks like he isn’t listening to this particular pitch in the carnival-like DEMO pit. [Photo by Richard Brown] 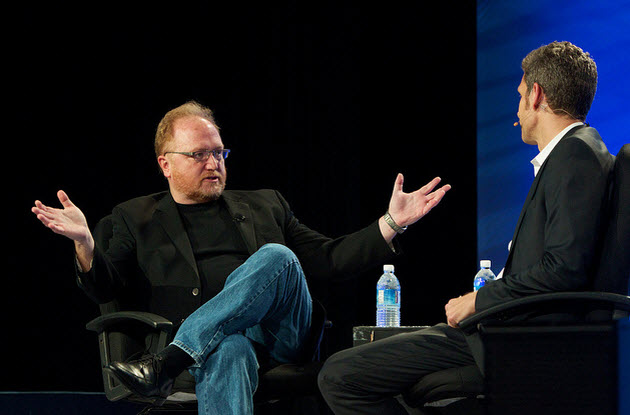 Phil McKinney, chief technology officer at the Personal Systems Group at HP, talked about the company’s acquisition strategy in a one-on-one with Matt Marshall. [Photo by Stephen Brashear/New Media Synergy]. 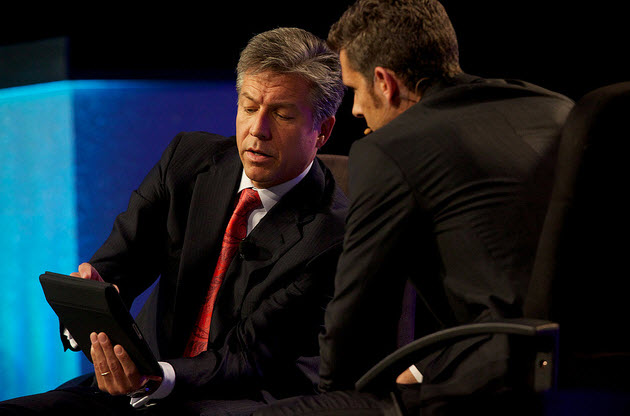 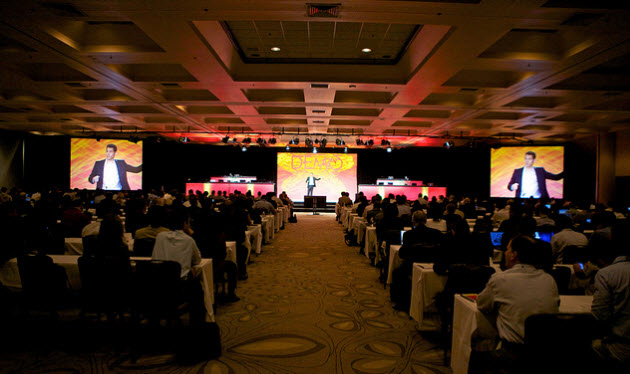 Here’s the view of Matt Marshall’s opening talk from the back of the room. [Photo by Stephen Brashear/New Media Synergy]. 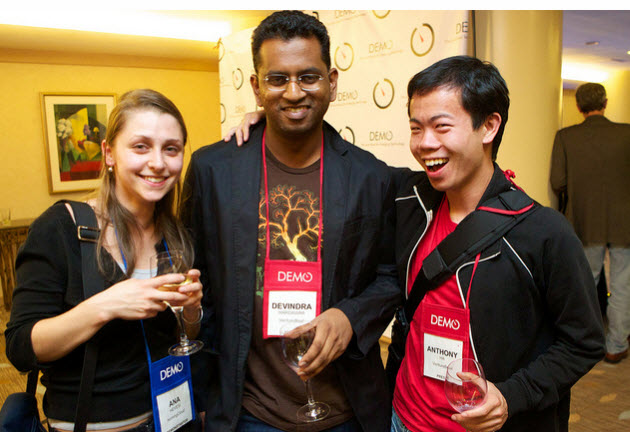 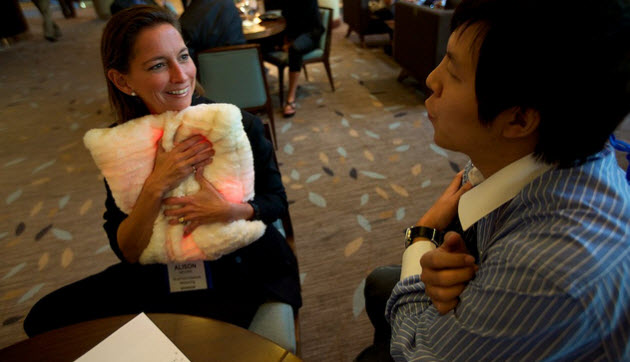 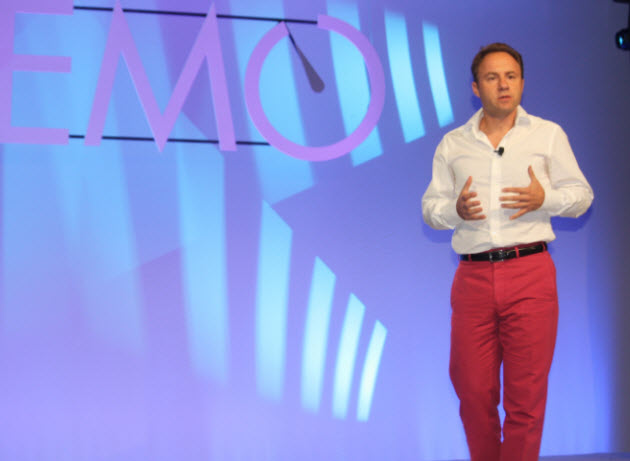 Philippe Suchet from Zappli, maker of MyShopanion for mobile shopping, made light of his pants, which he ordered online. 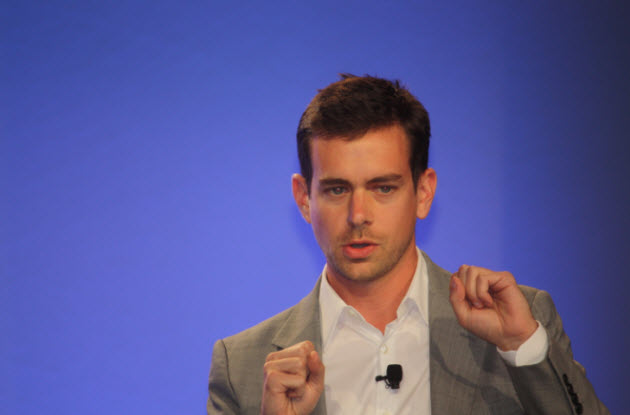 Jack Dorsey, chairman of Twitter and founder of Square, talked about the lessons he learned from Twitter and how he will apply them to his new mobile credit-card processing company. 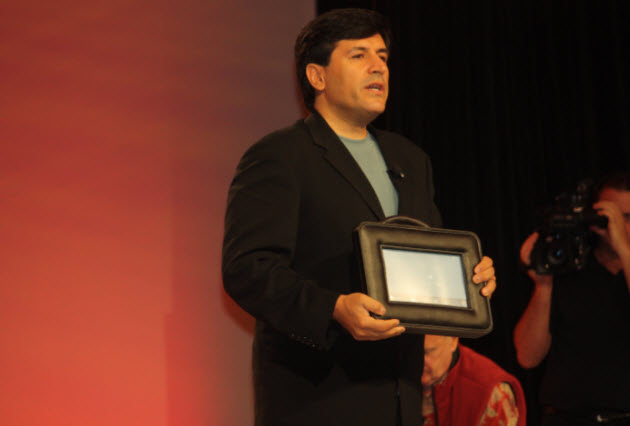 Kian Saneii, chief executive of Independa, showed off a tablet computer that people can use to take care of their elderly loved ones. 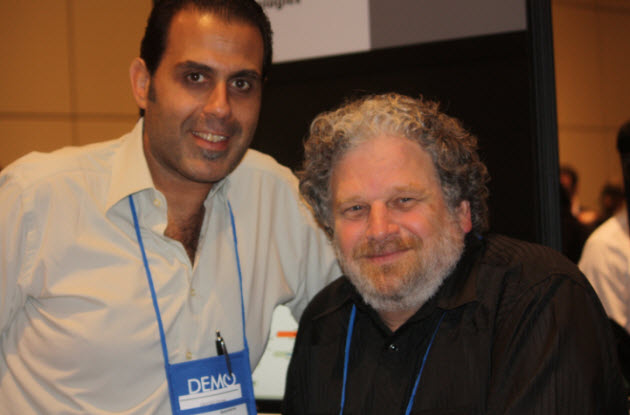 Michael Oiknine, (left) co-founder and CEO of Apsalar, and vice president Steven Reiss showed off their company’s analytics engine aimed at helping companies mine data to improve conversion of users from free to paid features. 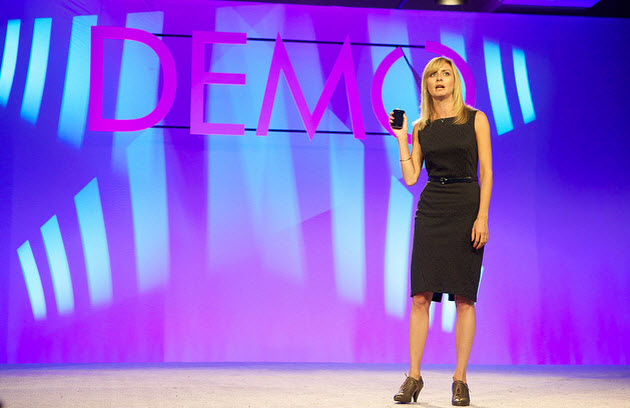 The presenter from MobiCart had to keep her cool as the DEMO gods rebelled and her colleague couldn’t get a web page to open. But she went on to deliver a fine presentation on setting up mobile e-commerce shops. She was a picture of calm under pressure. [Photo by Stephen Brashear/New Media Synergy] 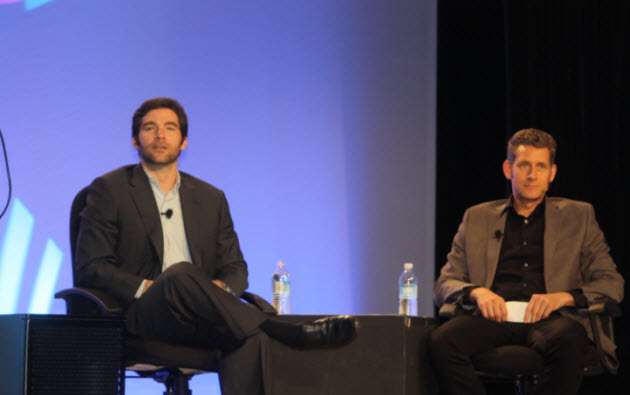 Mattt Marshall took a lot of questions from the floor for LinkedIn CEO Jeff Weiner. 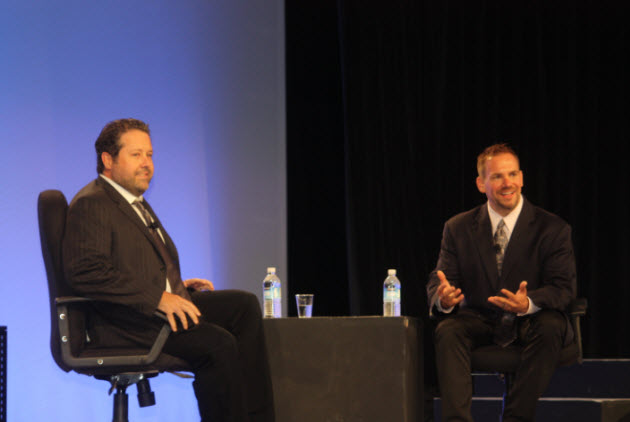 Owen Thomas, executive editor of VentureBeat, interviewed Sean Finnegan, president and chief digital officer of Starcom MediaVest Group, on the future of advertising and the need to take startups seriously. 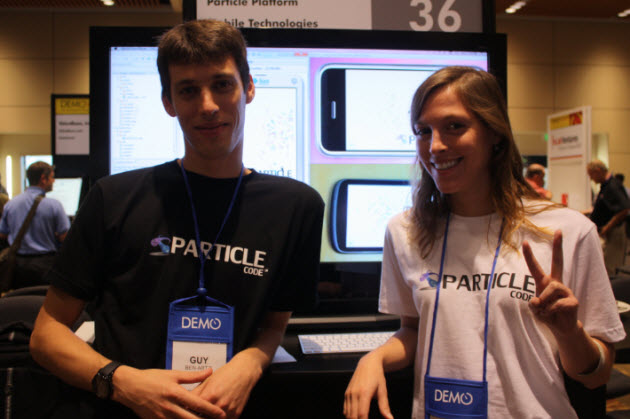 Guy and Galia Ben-Artzi are a brother and sister team. They previously founded Mytopia, a casual online game site. In creating that, they found the seed for their latest business idea: Particle Code. The company lets developers create a game or app once and then use it over and over again on different mobile platforms.