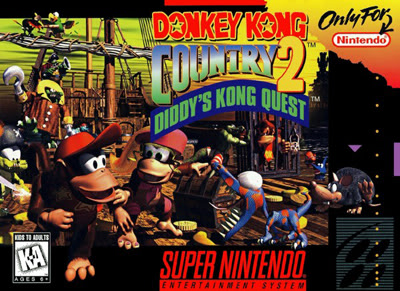 Back when platformers ruled the world, settings for levels varied wildly from stage to stage, a stark contrast to the more consistent approach today’s games take. They provided for some nice opportunities to show off how versatile a graphics engine is and allowed developers to expand their level design possibilities. But most importantly, it creates opportunities for thematic music, making for a diverse audiovisual experience that is cohesive within each level but provides a wide variety throughout the game. Donkey Kong Country 2 makes a very good case for this school of design. 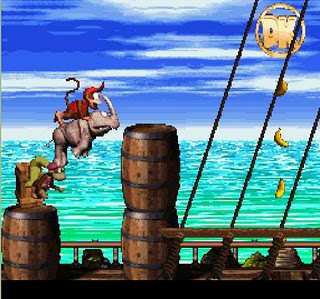 The second game in the series broke free of the slight thematic differences of the levels and went wild with wacky concepts. Many of these lent themselves well to literal interpretations for theme music, starting with the first world. The first Donkey Kong Country ended on a pirate ship, complete with an approximation of nautical accordion music. Given that the sequel starts where the first game left off, it’s appropriate that the music does as well. “Klomp’s Romp” takes a simple melody derived from DKC’s final boss and adds creaking wood and blowing wind to simulate a ship at sea, establishing the setting nicely. The pirate-themed music continues to impress as the game progresses. “Jib Jig” is, as its title suggests, a spritely jig befitting a drunken sailor, and “Snakey’s Chantey” is a smart remix of the DKC final boss intro and a piano rendition of “Klomp’s Romp”.

The pirate-themed levels aren’t the only stages open to literal interpretations, as many of the game’s clearly-defined themes allowed for a mixing of sound effects and instrumentation to set the mood. The rhythmic clang of steel in “Mining Melancholy” is the perfect complement to the gem-filled background, not to mention the fact that it is infectious in its own right. “Forest Interlude”, which is the theme to the wind-filled haunted woods levels, is appropriately breezy, with gently escalating phrases and a cool pan flute to solidify the wind theme. Other songs find roundabout ways of incorporating the theme, such as with “Disco Train”. It’s a fun midtempo dance song that captures the spectacle and color of the carnival. It also features an occasional drone that crests and falls just like a roller coaster with scream effects to seal the deal. 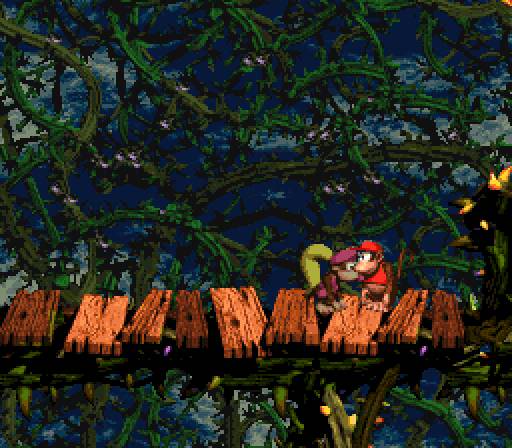 Not all the level themes lend themselves well to evoking literal concepts, though. What sort of song goes with a maze of giant brambles? This meant that the songs for these levels had to relate to the setting in different ways, creating a mood rather than defining one. It is in this regard that “Stickerbrush Symphony” stands as one of the finest tracks of the 16-bit era. It starts with some sparse percussion and begins to swell with multiple instrument parts until it gets to the horn section. Perhaps the most surprising part of the song is the fact that the horns it uses is of the synthesized variety, which can be horribly misused and annoying in the wrong hands. But instead of repetitive honking, a gentler touch is utilized, providing the entire piece with a serene connective melody. It provides a stark contrast to the dangerous spikes that constantly surround you, colliding opposing moods to create a beautiful audiovisual fusion.

There are a lot of other moments outside of the main stages that get some great thematic audio as well. Each of the Kongs’ shops features some appropriate music, from the school bells of “School House Harmony” to the smarmy game show music of “Swanky Swing”. But by far the best of these is the appropriately titled “Funky the Main Monkey”, a bass-heavy funk song that transcends the limitations of the SNES and sounds far better than any of the synthesized parts would be individually. And while the game is content to carve out its own niche outside of the first DKC, it’s great when they evoke elements of it in the music. The bonus room theme, “Token Tango”, is an energetic remix of the first game’s most memorable stage music.

David Wise, the in-house game composer for Rare at the time, refers to the time period he worked on the DKC2 soundtrack as his “experimental Paris period”, and it shows. The focused sound and limited instrument variety of the first game is a world away from the army of sounds you hear in the sequel. Lots of formal instruments are simulated, including brass sections, and odd sound effects contribute to each of the songs. But the fact that the soundtrack is all over the place is actually a strength and compliments the level variety you see in the game. Forget cohesion, Donkey Kong Country 2 proves that wild variety on an audiovisual level can make for a killer experience, one that is sorely missed in games today.