Foursquare just announced version 2.0 of its location check-in app for the iPhone. At first glance, it sounds pretty similar to previous versions of the app — unless other Foursquare users are a lot more excited about tips and to-dos lists than I am.

Still, these relatively minor changes hint at the company’s future direction and goals. The big theme seems to be directing users to new locations and activities, rather than just sharing their location with friends. Perhaps this will give me a better answer the next time one of my non-Foursquare friends (and there are lot of them) asks, “But what’s the point?” It could also help Foursquare make a stronger case about how it can help local businesses.

So to highlight your to-dos, the to-do list (a personal list of places and activities) has been separated from tips (general advice from other users). Foursquare has also created a button that will add any location in the app to your to-do list, and it will now remind you when there are to-do items nearby. The New York company has even extended this effort beyond the app, so that sites can include an “Add to Foursquare” button. If you’re reading about a cool restaurant, you could just hit “Add to Foursquare” and if you’re logged in, the restaurant will show up in your to-dos. 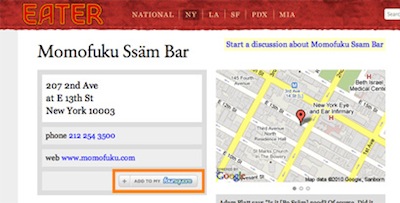