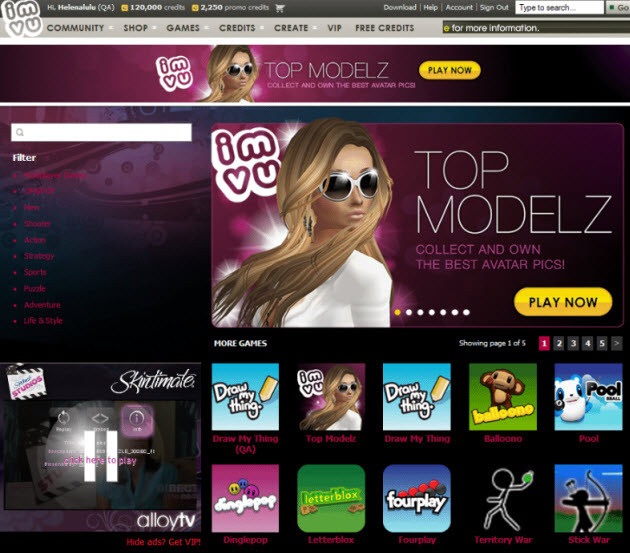 In a major strategic pivot, IMVU is shifting away from its virtual world roots to social games and entertainment.

In doing so, it is swimming in the same stream as companies that are adapting their businesses to cash in on the hot social gaming and social networking trends. IMVU will offer 75 games from three partners to its community of more than 50 million registered users. 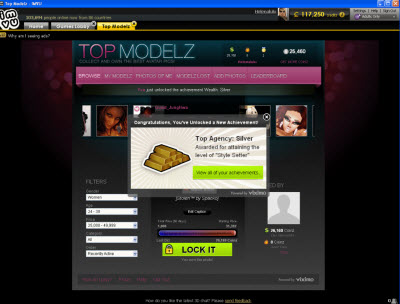 IMVU is partnering with game companies Viximo (whose Top Modelz game is pictured above), Heyzap and OMGPOP. IMVU offers its users small virtual scenes, rather than big continuous virtual worlds. In those scenes, such as rooms or gardens, users can customize the look as they want. They can decorate their 3D avatars (or characters), design and buy their own attire, and chat with friends.

“It’s a broader pivot for us into social entertainment,” Rosenzweig said. “Online entertainment, especially gaming, has grown up.”

Meanwhile, virtual worlds are waning. Linden Labs’ Second Life had demonstrated some growth this year, but a variety of other virtual worlds, from Vivaty to Metaplace, have shut down. Rosenzweig says the pivot is important, but it’s not a drastic switch born of desperation.

He said the company has been steadily growing and that the addition of games will help it grow to a new level. IMVU already has strong social network and virtual goods elements, since users buy virtual currency in order to buy virtual items in IMVU. Now, the social games will take the company to the next level, Rosenzweig said.

IMVU members can now log into the IMVU 3D chat or web site play 75 casual and social games, where the point is to meet new people and engage with friends. You can purchase in-game virtual goods while playing games such as Top Modelz, which is the IMVU-branded version of Viximo’s Photo Market game. You can also customize OMGPOP games with IMVU-specific virtual goods. And you can integrate IMVU avatar profiles and add friends from within OMGPOP games. Over time, users will be able to create more of their own games.

IMVU was founded in 2004, has more than 10 million unique visitors a month, and is generated revenue on a $40 million-per-year run rate. In 2009, the company hit $25 million in revenue. The company’s virtual goods catalog has more than 4 million items, most of them created by its own members. The number of virtual items grows by 5,000 items every day. In the last 30 days, 30,000 users sold something to other members. About 85 percent of revenue comes directly from consumers, who pay for virtual currency.

“We look forward to the integration of our enormous catalog of virtual items into our games,” Rosenzweig said.

In time, IMVU plans to extend beyond its own walled garden web site. It already has 1.35 million fans on Facebook, but hasn’t yet launched any Facebook apps.

Backers include Menlo Ventures, Allegis Capital, Bridgescale Partners and Best Buy Capital. Rivals range from Second Life in the virtual world business to Zynga and hi5 in social games. The company has 100 employees.