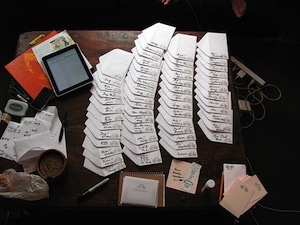 The company was founded by Joshua Baer, who’s also one of the managing directors at Austin startup incubator Capital Factory. It tries to make your Yahoo or Gmail inbox more manageable by prioritizing messages and by putting the less important ones into a separate folder (hence the company’s name).

OtherInbox says it now has more than 500,000 users. It makes money by selling aggregated, anonymous data to email marketers and through advertising.

The concept may sound familiar, even to non-OtherInbox users. That’s because Google recently launched its own email prioritizing feature for Gmail called Priority Inbox. That could be trouble for OtherInbox, but the company argues that its Organizer service actually complements Google’s new tools:

Gmail’s Priority Inbox and Organizer [are] a powerful combination to keep your email overload in check. Your Priority Inbox keeps the emails you really want at the top. Organizer keeps the automated emails out of your Inbox altogether.

Of course OtherInbox would say that, but it resonates with my own experience using Gmail, where I’m increasingly likely to ignore messages that Gmail doesn’t highlight as important. Because OtherInbox delivers daily summary of your messages, users don’t have to entirely lose track of the rest of their non-prioritized inbox.

OtherInbox has now raised a total of $4 million. The funding was first reported in The Austin American-Statesman and other Austin publications, and Baer has confirmed the news to me via email.