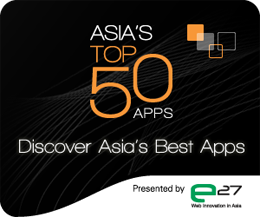 Knowing about the most innovative technologies, people and companies coming out of Asia, is what e27 is all about.  A few months ago, e27 set out to discover the best apps coming out of Earth’s most populous continent, so they ran a contest called Asia’s Top 50 Apps.

The search for the Top 50 was completely open — anyone could nominate an app — and the nominees were put to a public vote. The poll was open for 41 days and we received about 200 nominations and more than 5,000 votes were cast.

The breadth of the entries was remarkable. From niche applications like online diagram sketchers to mass market location-based directories and games, the spectrum of the way we live with web and mobile today was captured by the polls.

Of the Top 50, 10 apps were selected by a panel of judges as the most innovative of the lot. These 10 will be revealed at Accelerate 2010 in Singapore on September 22.

Jeffrey Paine was one of the judges. He runs the Founders Institute program in Singapore.”It is the initial traction that makes or breaks a company,” he said. “A contest like this is an important part of the tech startup eco system.”

Click here to see what the public chose as Asia’s Top 50 Apps.

See the 10 apps who made the cut present live at Accelerate 2010 in Singapore on 22 Sept.

*e27 is a media organization at the heart of Asia’s startup scene.