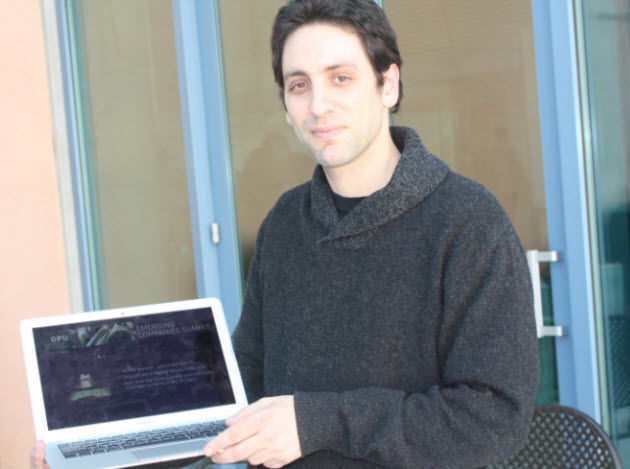 Otoy, the maker of a server-based gaming technology which allows play over the Internet, is announcing today that it has broadened its reach to more platforms and has signed up a new virtual-world customer, the maker of Blue Mars.

Jules Urbach (pictured), chief executive of Los Angeles-based Otoy, said today that his company is now allied with both Nvidia and Intel in addition to its previous alliance with Advanced Micro Devices. The alliances will help the company spread its video-compression technology, which allows users to play high-end games stored on faraway servers as if they were installed on client machines. One consequence of that is that users will be able to play the coolest games such as Crysis on low-end desktops, netbooks, or even iPhones.

By allying itself with Nvidia and Intel, Otoy can broaden its reach. Urbach said that customers requested that Otoy add support for Nvidia’s CUDA programming environment, which allows non-graphics applications to exploit graphics hardware. Otoy is making the announcement at this week’s GPU Technology conference in San Jose, Calif. Since high-end apps such as Adobe’s CS5 are starting to use CUDA, Otoy needed to support CUDA in order to run them.

“CUDA is becoming dominant and we would lose clients to competitors if we didn’t do this,” Urbach said. In general, however, Otoy is agnostic about the hardware its software runs on.

Meanwhile, Urbach said his technology is going to be used in Blue Mars, a high-end virtual world that uses very sophisticated graphics. Avatar Reality is making Blue Mars available as a big download. But it is also making a version that can be accessed via the cloud through a web browser. That version is tapping Otoy. That will enable Blue Mars, which normally runs on demanding computers, to run on the cheapest computers and netbooks. That could make Blue Mars far more accessible to the masses.

Otoy competes with rivals such as OnLive and Gaikai. Compared to OnLive, Urbach is certainly the underdog here. He has been talking about delivering this disruptive technology since 2004. But people took notice when Otoy announced the AMD alliance in January, 2009, and then announced its presence in a Supermicro supercomputer.

As we’ve said before, the goal of shifting computing from users’ machines to servers is an inexorable trend. Google hopes to undermine Microsoft’s client-based Office software with server-based Google Docs software. If it succeeds, Google could lure away some of Microsoft’s 500-million-strong user base and erode a cash cow for its rival.

Doing something similar in the games market, enabling video games that can be instantly played from a server with no download to a client machine, could be similarly disruptive. If you can buy a game over a network, you don’t need the retailer. And if the heavy computing is done on the server, you don’t need anything more than a display in the user’s device. There’s no need for a high-end gamer PC or a special video-game console like Sony’s PlayStation or Microsoft’s Xbox. The cost of delivering these games will likely be small, which means consumers could enjoy more games for less money.

These benefits are so obvious. But technically, it’s an enormously difficult problem. Faster broadband connections help, delivering better throughput, or one-way traffic speed. But games need low latency, meaning fast interactions back and forth. Improving broadband speed helps with throughput but not with latency.

Urbach was a cofounder of The Groove Alliance, a Flash game maker that made a splash in the 1990s with cool 3D web games. He also started LightStage, a facial-capture company that helped map human faces so they could be easily animated in movies such as Brad Pitt vehicle The Curious Case of Benjamin Button.

One of Otoy’s investors is George Gilder, the tech pundit who advocated the onset of the Telecosm, a world awash in bandwidth, in the days before the last bubble. Gilder has been one of the true believers in Urbach’s vision, in part because Gilder himself publicized the whole notion — articulated first by Eric Schmidt, who was then at Sun Microsystems and now is the CEO of Google — that huge broadband connectivity would “hollow out the PC.” A world with so much networking connectivity would have no need for heavy-duty computers at the users’ fingertips.