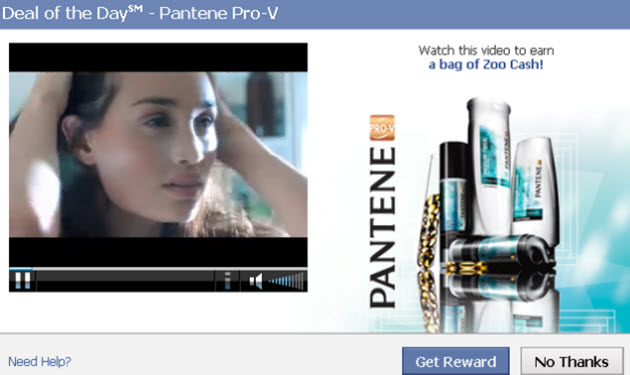 RockYou, the maker of social games and ad services for social media, said today it is working with other game developers to integrate its successful social marketing program within their Facebook games.

The Redwood City, Calif.-based company has been integrating the Deal of the Day into its own games such as Zoo World since March. In the deal, users encounter a screen in the midst of a game where they have to decide whether to spend money or not. If they don’t want to buy virtual currency with a credit card to pay for a virtual item, they have another option — the deal. If they choose to accept the special offer (like the one pictured above from Pantene, the shampoo brand). If they take it, the user can proceed to the transaction, getting their virtual currency in exchange for a promise to do something, such as watching an ad.

RockYou says deals that offer to give users something if they watch a 15- to 30-second video work particularly well. The offers also ask users to engage in surveys or polls, or they ask them to play mini games. RockYou says it reaches millions of users already with the Deal of the Day. Overall, RockYou says developers can increase their ability to make money from users by three times to four times. On top of that, a number of big Fortune 1000 brands, like Coca-Cola and Hewlett-Packard, are participating in the deals, bringing high-end brands into social gaming.

Getting noticed is a challenge for everyone building apps. Join us at DiscoveryBeat 2010, and hear secrets from top industry executives about how to profit in the new cross-platform app ecosystem. The conference takes place on October 18th at the Mission Bay Conference Center in San Francisco. Go here for conference details, or to apply to the “Needle in the Haystack” business contest. Early-bird tickets are available until September 22.