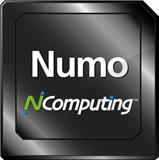 NComputing, a maker of a novel kind of desktop computer known as a virtualized thin client, has become one of the biggest computer companies in the world. And it’s because desktop virtualization is finally going mainstream, the company claims.

The Redwood City, Calif.-based company has sold more than 2.5 million desktops that use its virtualization software. In the second quarter, it had 21 percent of the thin-client market for enterprises, second only to Hewlett-Packard and more than long-time thin-client maker Wyse. NComputing’s share compares to 18 percent for Wyse and 25 percent for HP, according to market researcher IDC. (Wyse disputes these numbers, saying it depends on how you count various thin-client categories).

That’s great for a three-year-old startup. By the end of the year, NComputing could very well pass HP, since its revenues are growing 40 percent from a year ago. The company’s chief executive, Stephen Dukker, said in an interview that NComputing is expanding on all fronts. In Asia, where it has won big contracts with Indian schools and big institutions, NComputing has the largest market share for enterprise thin clients. 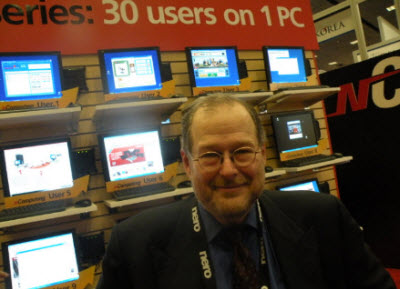 “We’re three years old and we’re competing against companies that have been around for decades,” Dukker said. “It is happening because desktop virtualization is going mainstream.”

It’s working because NComputing has created a better mousetrap. The company’s newest product is the L300, a little box that connects to a standard Windows computer and uses that PC as a server, allowing a bunch of users to share one computer through NComputing’s distributed computing software. The box, in turn, is connected to a keyboard, mouse and monitor.

Such devices are sometimes called “thin clients” — though in the age of netbooks and cloud computing, that seems like a dated term. The client taps the computing power of the PC, just like old terminals shared a slice of the computing power of a mainframe computer decades ago. With the L300, as many as eight clients can share a $700 PC. Each one of those clients can simultaneously run a 1080p high-definition video, and each client uses a few watts of power, far less than a stand-alone PC.

The L300 is the first NComputing product that uses the company’s new Numo chip, which helps reduce the cost of computing dramatically by combining distributed computing with its vSpace virtualization software, which allows a computer to be subdivided so that it can serve different users. The L300 is targeted at the enterprise market, where companies can enable lots of workers to get on the Internet or company network without much expense.

With typical enterprise PCs or thin clients, you have to pay a lot of licensing costs per machine, such as licenses for an embedded operating system or other software, Dukker said. With NComputing, the cost is lower because users don’t need copies of the other kinds of software. But there are some things that the L300 can’t do that a PC can, such as running games. Of course, companies may like that fact, since it means employees can’t goof off at work.

In the fourth quarter, NComputing is also going to roll out a marketing and education campaign with different strategic industry partners. It is also expanding geographically in Latin America, Korea and Japan. Dukker believes his company can be more aggressive than PC makers because it doesn’t have to worry that NComputing’s thin-client sales will hurt its PC sales, since NComputing doesn’t sell PCs. NComputing has 20 million users in 140 countries.

It has done well in education and government sectors; now it is expanding into the enterprise. Dukker says he won’t rest until NComputing drives the cost of computing hardware toward zero.

“We think we have the largest opportunity in the information technology industry,” Dukker said.