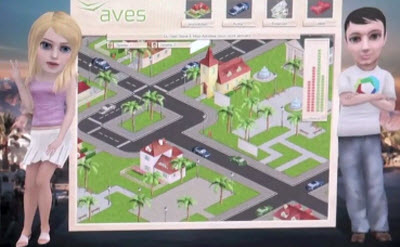 Planting a stake in Europe, Zynga has acquired the assets of Dextrose, a game engine developer in Germany, for an undisclosed price.

The team in Mainz, Germany will become Zynga Germany (based in Frankfurt). Dextrose developed the Aves Engine, which enabled high-end game play within a web browser. An engine is the underlying technology that allows game developers to create a game that runs on a particular game platform.

Zynga’s games such as FarmVille have often been criticized for their bad graphics. Based on the look of the Aves Engine (pictured), Zynga will be taking a step up in graphics quality. The question is whether Facebook’s platform, where most of Zynga’s 200-million-plus users are, can support such graphics. The Aves video below shows how developers created a game prototype that looks a lot like Electronic Arts’ The Sims game. But there is no telling just yet what Zynga would use the engine for.

Zynga didn’t say more about how the German developers would help the company beyond focusing on the “best in next-generation gaming technology.” Dextrose was founded a year ago and does not make its own games. The company was founded by Paul Bakaus, who will become chief technology officer of Zynga Germany, and Rocco Di Leo, who will now become country manager for Zynga Germany. Di Leo is responsible for development of future browser game technology.

Zynga has been on a spree lately. It bought music social game maker Conduit Labs in August, China’s XPD Media in May, and Serious Business in February. Here’s a video of the Aves engine: