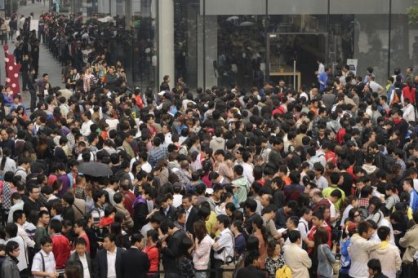 The battle between Apple and Google is reaching a critical phase in the mobile phone market. Today, Apple got its shot in at Google with the launch of the iPhone 4 in China, and by all accounts it was a great debut for Apple.

The Chinese market is the biggest battleground in mobile, with more than 800 million subscribers, and activations for both platforms are running neck and neck. Android phones have been selling like hotcakes in China. But today’s Apple launch turned out the crowds. More than 200,000 customers had pre-ordered the model from China Unicom, far better than the 5,000 or so that Apple got when it first started selling the iPhone in China, almost a year ago.

By 8 a.m. today in China, there were more than 1,000 customers waiting in line at the Beijing store.