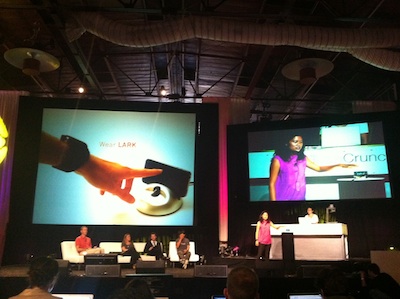 One of the challenges of a romantic relationship (as I recall very vaguely) is adjusting to the sleep habits of your significant other. If you regularly wake up earlier than your boy- or girlfriend, that alarm jolting them from sleep could be a real source of tension.

A startup called Lark wants to solve the problem with a new kind of alarm. Instead of a loud beeping noise, music, or other sounds, Lark wakes you up with vibrations. Users download a mobile application and buy a wristband. Then after they set the alarm in the app, they’re woken by gentle vibrations from the wristband.

Lark worked with a medical consultant to develop the specific vibration, according to co-founder and chief executive Julia Hu. Not only does it wake you up effectively, but it’s also less stressful than a loud noise.

“It feels random, it feels like a nudging,” she said.

The product was pitched on-stage during the TechCrunch Disrupt conference’s Startup Battlefield. One of the competition judges, Sean Parker of the Founder’s Fund, sounded skeptical that the product could be the basis of a real company: “I just have a hard time believing you’re serious.”

Hu responded that the company is for real and that it could also use the technology as platform to wake you in other circumstances, for example when you get a phone call in the middle of the night.