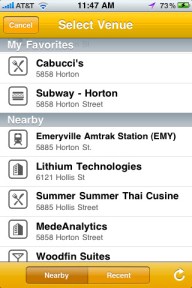 Mayor Maker, a recently launched location-based application from Location Labs, is giving iPhone users the opportunity to automatically check-in to as well as check-out of locations using Foursquare. The application is currently available on iTunes.

Until today, Foursquare users had to manually launch the application and check-in to locations they visited. With Mayor Maker, users can now create a list of their favorite locations and automatically be checked into that location when they arrive. The app uses geo-fencing, which tells the application when a user enters a specific area, like a restaurant or store.

Most interestingly, the application also has a check-out feature. When users leave a location, the application checks them out automatically. For the user, the added benefit is that they can tell their friends when they are leaving. I’ve had a few instances where I went to meet a friend because I saw their location on Foursquare and when I arrived they were gone. But the real benefit may be to the location owner, who can now see when a customer arrives and leaves. Knowing how long someone stays at your location could give good insights into customer service and loyalty.

Other companies are starting to look into automatic check-ins as well, including ShopKick, an application that checks you into major brand retailers like Best Buy and Macy’s automatically and rewards you with gift cards, movies, music downloads, and gadgets for your actions. I don’t think Mayor Maker is a major threat to the growing number of services, but it is a good example of what can be done using Location Labs’ platform for developers.

Location Labs recently announced a partnership with Citygrid Media that granted it access to data on over 15 million local businesses. Also, the company recently announced that its cloud-based Universal Location Service (ULS) platform can now locate over 250 million phones.