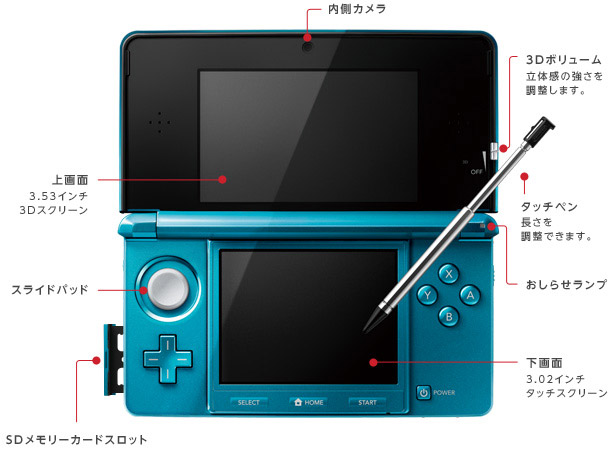 Nintendo reveals a wealth of information concerning the 3DS today at Nintendo Conference 2010. The 3DS is set to feature a Game Boy Virtual Console similar to the Wii's, a new tag mode allowing games to wirelessly update with new content while the system is in sleep mode, enhanced Mii Channel options, and more. The handheld will launch February 26 in Japan and sometime in March in North America and Europe. It will retail in Japan for ¥25,000, which is approximately $300 American though Nintendo hasn't confirmed this price. Hopefully it includes Nintendo's traditional money-printing capabilities as well because that's a pretty steep price for a handheld. [Nintendo3DS.org.uk]

Treyarch confirms Call of Duty: Black Ops will include a zombie mode similar to the one found in World at War. "Zombies have been such a hit with our community that we were committed to bringing brand new zombie experiences to [Black Ops]," Treyarch Studio Head Mark Lamia said. "We've taken extra special care to retain the essential ingredients of our zombie game, and have also crafted a nice surprise for the fans." Treyarch is the only company I can think of that actually improved their game with the inclusion of zombies.

Capcom announces Mega Man Legends 3 nearly 10 years after the last installment. Mega Man creator Keiji Inafune announced he and his team are developing the game for the 3DS despite the previous entries not meeting sales expectations. He told excited fans to think about what happened at the end of the last game while waiting for more information. If I'm remembering, correctly the ending of Legends 2 went something like, "That was awesome! Hope I don't have to wait a decade for the next one…." [The Mega Man Network]

LucasArts reveals that players will be able to wield the Force as Guybrush Threepwood, the hero of the Monkey Island games, in the upcoming Star Wars: The Force Unleashed 2. According to The Force Unleashed 2's Facebook page, Threepwood is available as a character skin. This is cooler than being frozen in carbonite! Sorry, Han.