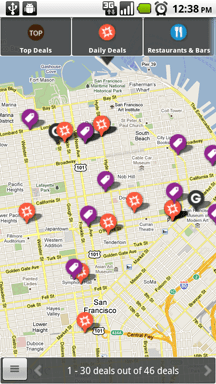 Activity-planning site Center’d is launching its Dealmap Android app today that will let users filter out the chaff and find the best deals in the vicinity.

The Menlo Park, Calif.-based company says it can aggregate daily deals from almost 100 sources and put them all in one place. Center’d previously launched an iPhone app that has been downloaded more than 175,000 times in its first six weeks. The app sorts through more than 350,000 local deals and coupons and makes them available to consumers where they want them on web sites, social apps, daily emails and mobile apps. More than 375,000 people get these updates daily. The service can filter by 10 business categories and eight deal types.

Sifting through the chaff is a big part of daily life. If your mobile phone can help you do that, it will become an even more indispensable part of your life. Consumers and businesses can upload their own deals to Dealmap, so the company takes advantage of user-generated content. This app can aggregate daily deals from companies such as Groupon and Living Social. It then organizes the deals and maps them, using relevance algorithms.

Center’d has raised $10 million from Norwest Venture Partners and KeyNote Ventures. Angel investors include Bill Harris, former PayPal and Intuit chief executive. Competitors include 8coupons and Yipit, neither of which have a mobile app yet. Center’d was founded in 2007 and the Dealmap web site launched in May. The company has eight employees.