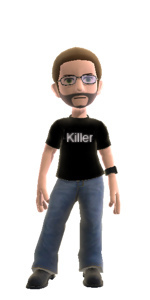 It's 2016. I've aggressively acquired the big hitters of the video games industry and merged the companies into a new venture: Ninsonosoft.

Skip forward a year and I'm ready to unveil a new console: the Boxwii Station (BS). A decade has passed since the last generation and Kinect is now five years old. Rabid consumers are craving something more, something new. And I'm about to give it to them.

I hold a special launch event. You get an invite. You eat the nibbles and drink the champagne. You shake my hand. You think I am charming and modest.

The lights go out. Anticipation grips the room. A projection appears on the back wall. It's a trailer for Deathmatch, the flagship release for the BS. Your jaw drops. Crumbs of expensive canapé fall from your lips. It's the most amazing first person shooter you've ever seen. It's intense and violent yet somehow … beautiful.

Hideo Kojima, Sam Houser and Steve Jobs warm up the crowd with testimonials in my honour. Then I take the stage. I tell everyone I'm ready to introduce the future of immersive gaming. 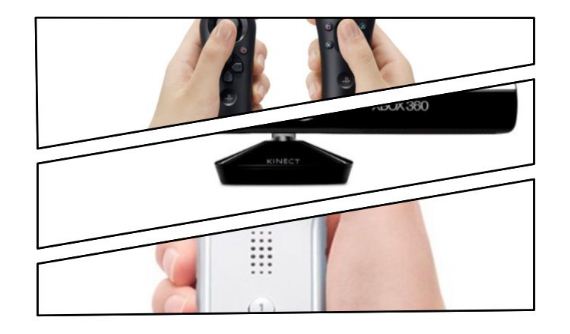 I explain how the Wii, Move, and Kinect showed us the direction our medium should be moving in, and how we should best invest our money. Those interfaces taught us what it takes for games to truly hook the player. Immersion is not achieved by appealing to the mind, it's achieved by involving as much of the body as possible. Years of throwing money at plot, character development, and meaningful choices have proven to be misguided. All we ever needed to do was to make shooters work with motion control.

How foolish I was! You laugh. Everyone laughs.

I continue by explaining that to achieve the most immersive experience possible, we've taken controllerless interaction to the next level. Think Kinect, but with one crucial addition — the player receives unambiguous physical feedback from the game.

I let that sink in before presenting Deathmatch's three revolutionary multiplayer modes: Casual, Core, and Hardcore.

I begin by describing the Casual mode. Here, if your character is killed, the Feedback Unit (a discreet device worn comfortably around the neck) gives you, the player, a minor electric shock.

From our extensive testing, we've learned that the threat of the shock changes the style of gameplay dramatically. It slows people down and makes them consider their actions in an entirely new way. Tense and exhilarating match-ups are the order of the day.

You're used to dying and watching a respawn countdown, right? Five seconds to respawn, four, three, two, one — Whoosh! Back in the fray.

Well, all that is in the past. In Core Deathmatch, if your character finds himself on the receiving end of a fatal headshot or frag explosion, the Feedback Unit causes you, the player, to lose consciousness for a few moments. You gather yourself, shake it off, and respawn whenever you feel ready. At least 84% of people reported no side effects — and for only $49.99, we provide a limited-edition soft landing pad for your comfort.

I clear my throat and wait for the applause to die down before presenting the most innovative mode of all: Hardcore.

Remember the original GoldenEye with its one-shot kill multiplayer option? Well, we're taking that to a whole new level.

Hardcore consists of one hundred players battling it out on a map so huge it makes Just Cause 2's Panau look like a single chamber from Portal. The hook? One kill ends the match.

The player who makes the kill is rewarded with a million XP and a "killer" t-shirt for their avatar (see earlier image). The player who is killed … is really killed. Death is instantaneous and delivered via the Feedback Unit in the form of a massive shock to the brain. Imagine the possibilities. 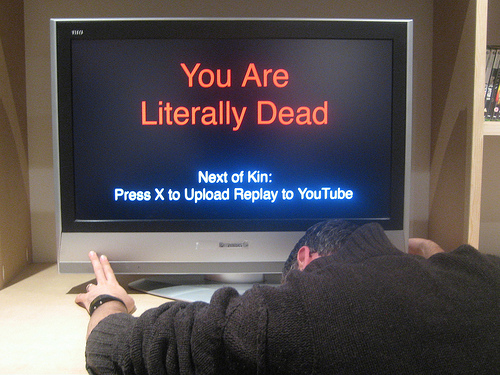 It's 2016 and gaming has changed forever. Want real immersion? Then you should forget art, story, and characters. Silence your critical faculties and embrace the logical conclusion of developer focus on controller-free gaming. Embrace Deathmatch.

At this point, we open the booths for you, attendee. Step inside one of our three playtesting areas: Casual, Core, and Hardcore.

So, intrepid gamer, which mode will you choose?

(Please note that to enjoy Hardcore mode, players must pre-pay for our seven year subscription plan.)