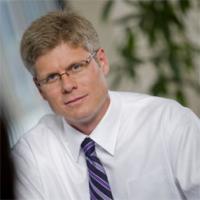 Now that the government has opened up the “white space” in between television broadcast frequencies and other commonly used wireless frequencies, the next step for mobile phones is to design chips that automatically switch networks, Mollenkopf said. He said it was “good for business” for Qualcomm to develop chips with radios that can tap into new radio spectrum.

“What you’re going to be using, what radio technology you’ll go through, will vary in very short distances — sometimes less than a meter,” Mollenkopf said.

Phones today are configured for individual networks, with chips specifically designed with radios for GSM, CDMA, EDGE and soon the next-generation wireless data network LTE and other 4G networks. These networks are restricted to a certain range of the wireless spectrum, with each range separate so there isn’t interference between, say, television broadcasts and phone calls.

Mollenkopf was mum on whether Qualcomm was developing a CDMA-enabled chip for use in Apple’s iPhone — running on the assumption that Verizon will soon carry the iPhone that a number of analysts and rumors indicate.