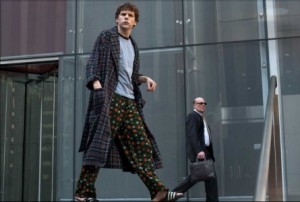 The Social Network may be getting insanely good reviews, but early Facebook employee Matt Cohler said the movie’s portrayal of the company and its co-founder Mark Zuckerberg is “just wrong.”

Cohler spoke on a panel this afternoon after a movie screening in Redwood City, Calif. According to the film, Zuckerberg started working on Facemash, the site that would eventually lead to Facebook, as a way to get back at (or maybe win over) a girlfriend who dumped him when he was a student at Harvard. Cohler said that doesn’t match up with his understanding of Zuckerberg at all: “Mark’s not the kind of person who’s ever needed to do something like Facebook to feel good about himself.”

The film’s accuracy has been debated, with Zuckerberg calling it fiction, while screenwriter Aaron Sorkin said it’s “absolute non-fiction”. (It’s based on Ben Mezrich’s book The Accidental Billionaires, but Sorkin said he also did his own research.) Cohler came down on the fiction side, describing the movie as a “Hollywood fairy tale.”

Beyond the premise, Cohler said there are “a billion little details” that were off. For example, Zuckerberg and his cohorts in the film talk about how the site has to be cool, but Cohler said that’s getting things backwards. The team always wanted the site to be useful, not cool.

AllThingsDigital‘s Kara Swisher, who moderated the panel, said the portrait of Zuckerberg didn’t match her own conversations with him either. In the movie, he comes off as someone who talks at a million miles a second (though he often says just the wrong thing). In person, he tends to be quiet and awkward, she said.

So is The Social Network bad publicity for Facebook? Swisher said it was actually easier on Zuckerberg than she was expecting — it humanized him to the point that she actually rooted for him.

Michael Fertik, founder and chief executive of Reputation Defender, saw it as more negative, for Zuckerberg if not for his company. Fertik said the movie is about the idea that Facebook’s creation is tied up with original sin, and it basically implies that Zuckerberg has more dirty laundry that could eventually come to light.

“It humanizes the character, but I don’t think that’s much of an achievement,” Fertik said.

VentureBeat Executive Editor Owen Thomas saw the film on Monday night, and he also said it could have been much worse for Zuckerberg. Sure, the movie tracks Zuckerberg’s falling out with Eduardo Saverin, but there are other early Facebook employees who left, and whose departures aren’t covered in the film — including Doug Hirsch, Owen Van Natta, Gideon Yu, and yes, Cohler, who left Facebook in 2008 to become a partner at Benchmark Capital.

Referring to dialogue from the movie, Swisher asked Cohler if he thinks Zuckerberg is an asshole. His response: “No.”