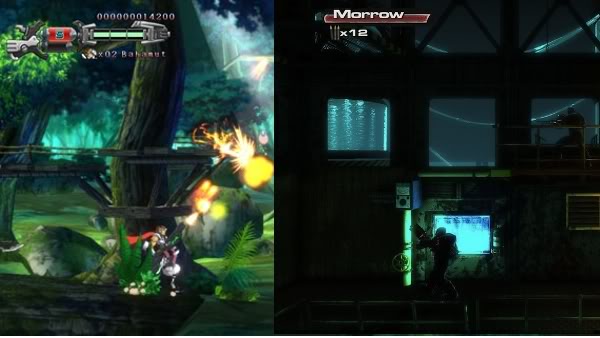 Konami aims to flex that flabby nostalgia muscle of yours with a double helping of HD digital-download retro revival titles that harken back to the quarter-draining days of arcade run-and-gun side-scrollers.

At San Francisco's tres-chic Hotel Triton, I got some hands-on time with the jingoistic Rush'n Attack: Ex-Patriot and the highly stylized Hard Corps: Uprising. Both are planned for a fall/winter release on Xbox Live and PlayStation Network, and although side-scrollers aren't my forte (I still flee from goombas in Mario), I couldn't help feeling solidly impressed with what I saw.

Hit the jump to get the scoop on Konami's latest mixture of old and new. 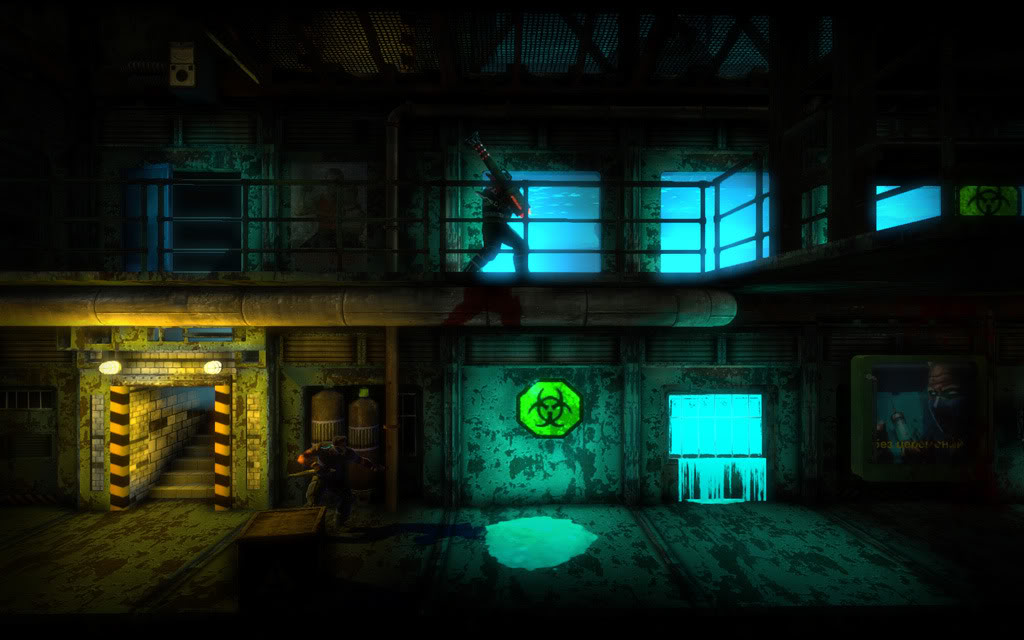 Ah, the Cold War. Life was simple back then. You've got your dogmatic communism butting heads with laissez-faire capitalism. Mind-scarring '80s pop-culture was on the rise. Reagonomics.

But for a single American commando trapped behind the Iron Curtain, the only thing that matters is a knife.

It's Operation: Angel Tear. You are part of a special forces team sent deep into Soviet Russia to rescue a fellow operative. Your orders explicitly instruct you not to get caught. Predictably, your team gets caught. (It might be just me, but those green berets were probably a dead giveaway.)

You're given an inoculating cocktail shot of something called ulyssium (more on this later) and other pleasant-sounding chemicals before being left to rot in a cell of a gulag. That is, until you're set loose by a mysterious individual.

Armed with only a (really huge) knife, it's time to find your teammates and escape. It's time to attack some Russians. It's time for Rush'n Attack: Ex-Patriot. 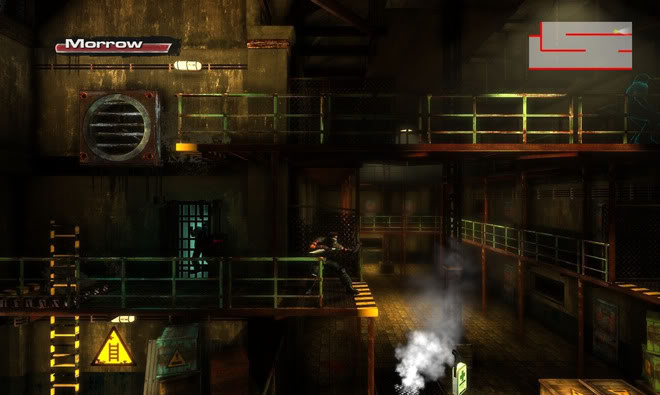 An array of weaponry helps facilitate the bloodshed, including rocket launchers, grenades, flame throwers, and even a deployable automated gun turrent. Items such as night-vision goggles, gas masks, and body armor can also be found.

But the majority of your kills are performed with your knife, an omnipresent weapon that accompanies you throughout the game's three massive levels.

"Most of the time, it's just you and the knife," explained Producer Andy Pan. "An analogy I like to use is that the other weapons are like girls you've dated in the past; things were great, but it didn't quite work out. The knife is the girl that you marry." 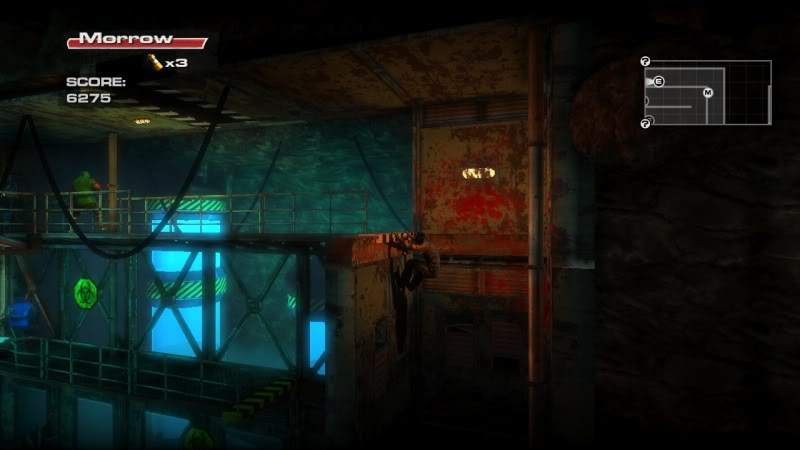 Don't fret if you're not too keen on skulking in the shadows and dishonorably ending the lives of your foes with cowardly backstabs. Pan assured me that players can accrue the same number of points and combo multipliers in toe-to-toe combat.

In fact, go ahead and mash those buttons to your heart's content. Random attacks can trigger a satisfyingly brutal takedown animation (based on actual moves from systema, a Russian martial art) — "random moments of badassery," in the astute words of Pan.

Finally, just what the heck is ulyssium? Well, after the Tunguska event of 1908 — when a meteor slammed into Siberia and caused a tremendous explosion — residue found in the meteor's wake was discovered to have beneficial properties in protecting an individual from the area's harsh radiation. The small dosage that gets injected into you is enough to keep you strong, and crystals of ulyssium can be picked up to extend your health bar. The stuff is highly toxic, though — too much of it will kill you. "Think of it as plutonium on steroids," said Pan. 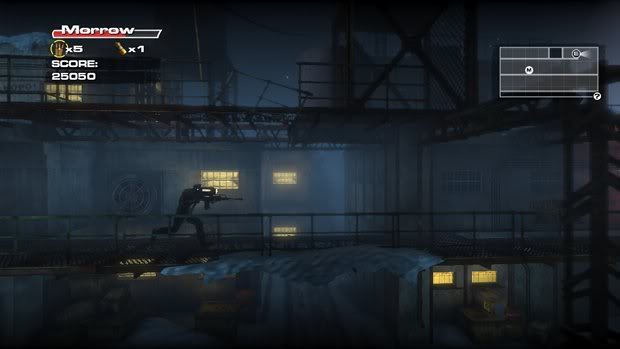 Overall, I was pleasantly surprised with Ex-Patriot's humble nuances. Granted, you can't expect a side-scroller to dip into complexity, but the game's intriguing blend of stealth and overt action has me pretty excited for its release. 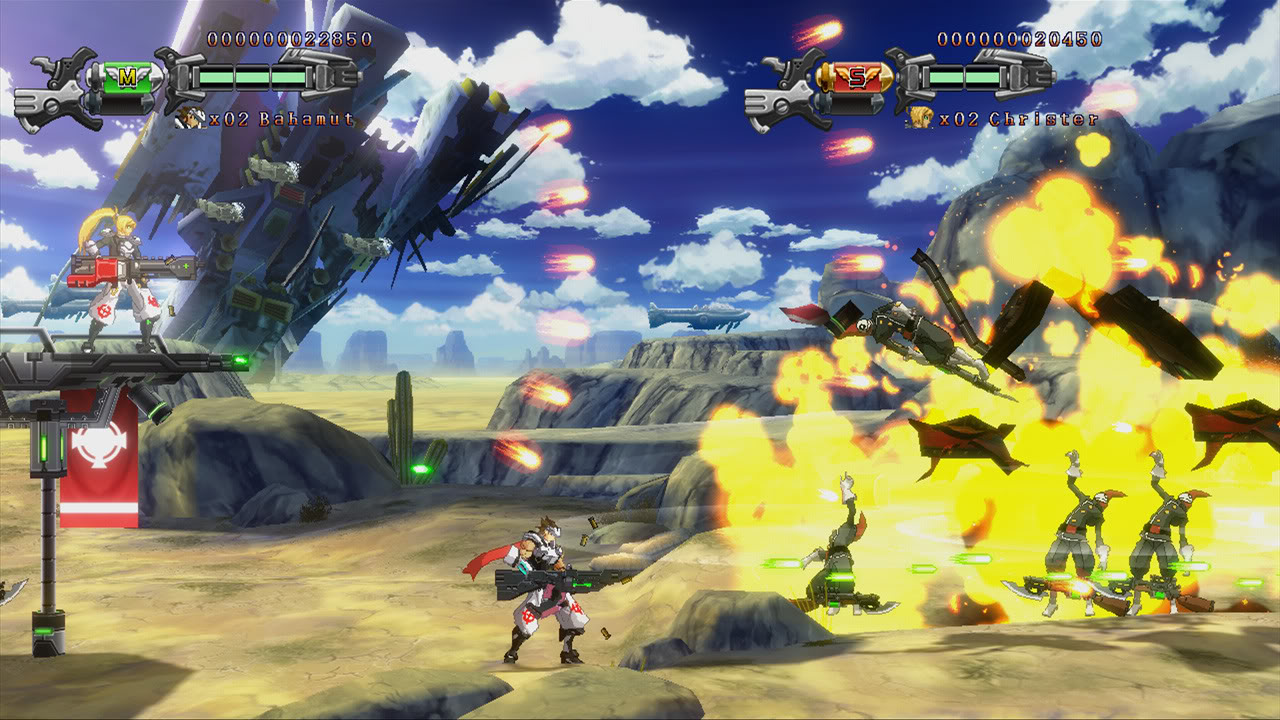 That's certainly not entirely true with Hard Corps: Uprising. As a direct prequel to 1994's Contra: Hard Corps (and the first game in the series to not have the Contra brand name in its title), Uprising utilizes many elements from its predecessors, but throws in a few new goodies as well.

Players will step into the polished boots of Colonel Bahamut, a veteran soldier. Contra geeks will remember that the Colonel was the main antagonist of Contra: Hard Corps. For now, though, he's the world's most badass hero.

The story in a nutshell: Set 20 years before the first Contra, Uprising's world is ruled by an empire and its oppressive leader, Tiberius. After rallying the resistance forces under his banner, Bahamut begins an assault in earnest to topple Tiberius. 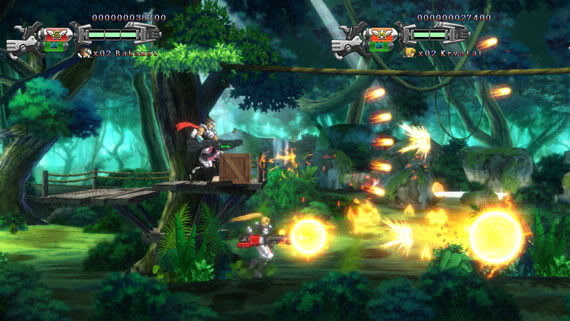 I won't beat around the bush here: The gameplay I saw was pure Contra. Bahamut can be joined with another pal, Krystal, in two-player co-op. You'll be running left and right on the screen a lot while blowing everything to smithereens with weapons ranging from a standard rifle to a cataclysmic flamethrower.

Another immediately noticed aspect is Uprising's anime-inspired art style. As the game is being developed by Arc System Works (of BlazBlue and Guilty Gear fame), this wasn't much of a surprise — but the new visuals are a nice touch.

The real highlight is the brand new Rising Mode, which introduces RPG elements to the game. Players can earn Corps Points while progressing through the game's eight levels that can be spent on chatacter upgrades such as increased speed or a larger health pool. Weapons can be upgraded for increased power and effectiveness. 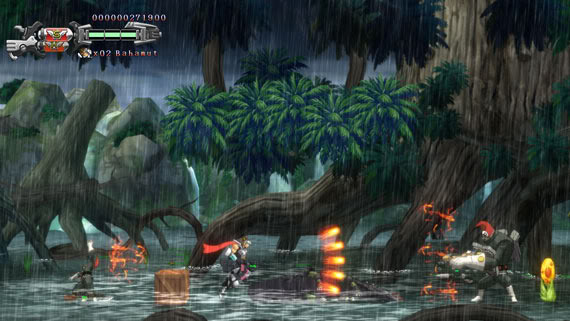 Seasoned Contra gamers can look forward to the more traditional Arcade Mode, which yanks the health bar for a heightened challenge. Not that I needed to be reminded on the infamously brutal difficulty of Contra, anyways — I repeatedly got my ass kicked in the first area of the demo.

Associate Producer Kenji Yamamoto hopes that Corps Points will serve as an "equalizer" for experienced and newbie Contra players alike, bridging the disparities between casual and hardcore for the first time in a Contra game. 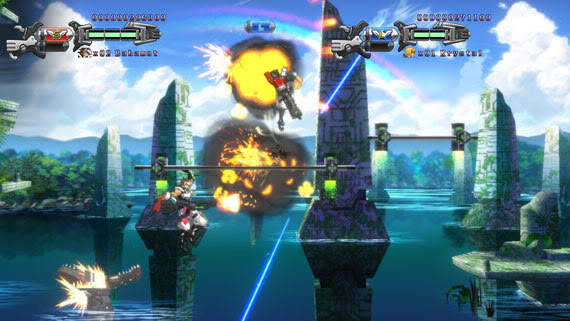 Ultimately, Uprising is a faithful homage to Konami's extensive lineup of run-and-gun games. Although the inclusion of Corps Points and the ambitious Rising Mode definitely mixes things up, the game is a bona-fide entry into the Contra franchise with its classic and chaotic gameplay, and it will definitely find a home in my Xbox 360's hard drive.