You might know Mario Party as a series of minigames, but is that really an accurate description? Anyone not familiar with video-game lingo would say it's a digital board game, and they'd be absolutely right.

Mario Party is all about making tough decisions, forging fragile alliances, ripping people off, and being as greedy as possible, all while praying the dice are on your side. Players may fuel these actions through minigames, but it's the bigger task at hand that drives them. That's not to say they aren't fun, though. On the contrary, Mario Party is the only video game to ever make me willingly bring physical harm unto myself because I got too caught up in the fun.

In 1999, a few friends and I would return to school on Mondays with our palms blistered and peeling; too much partying with Mario. Specifically, the fishing and tug-of-war games requiring the rapid rotation of the control stick took their toll on us. Nintendo Power suggested we use our thumbs and index fingers, rather than our palms, to get through these challenges, but we suggested they were crazy. We wanted to win.

The history of the series is a blur after that. Nintendo released nine more Mario Party games, but I only ever owned the first. It's a board game after all. I don't need new versions of Monopoly or Risk to enjoy the originals. It appears Nintendo finally caught onto this and decided to take the lessons learned from Mario Party and combine it with the universal appeal of the Wii.

The result, Wii Party, is a game that indicates Nintendo forgot how to party.

In Mario Party, players chose from a variety of boards to compete on. Each had its own unique twists and gimmicks, but they ultimately shared the same goal: earn as many stars as possible. minigames strung each board together by offering coins to the winner, which he could use to buy stars, build obstacles, take short-cuts, etc. It didn't matter that you were essentially playing the same game over and over as it was full of drama and excitement no matter which board you played.

Wii Party goes the opposite direction. Instead of playing one solid game with slight twists between boards, Wii Party has a variety of games with totally different rules. The only common trait they share is the use of minigames to push the game forward.

There's a typical dice-rolling board game that fails to offer much more than Chutes and Ladders or Candy Land. There's a mix between Texas Hold 'Em and Go Fish without any of the strategy. There's also Bingo, Memory, and a game that accurately recreates the feeling of playing Jenga, but they're each shallow excuses to play minigames. Each manages its own unique offering, but that's precisely what's wrong with Wii Party. 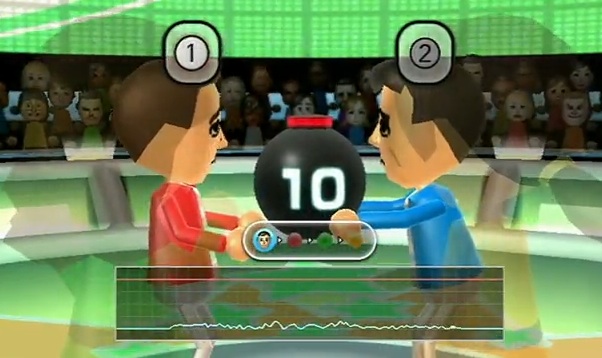 So many individual elements beg to be combined together to form a game capable of topping Mario party. One uses numbered cards instead of dice to determine how far you can move each turn. After a while, you're able to manipulate these cards to the point that you can choose exactly where you'll land each turn.

Another game revolves around a communal bank of points. Players can add and draw from this bank with the spin of a wheel. As the bank grows, so does the excitement, because whoever wins a minigame wins everything in the pot.

These games also remove majority of the player interaction, making for a rather bland affair.

By the end of a game of Mario Party, friends could become bitter rivals. You may have stolen just enough coins from one to prevent Toad from selling him a star, and he may have purposely lost that last minigame where you two were partners just to get back at you. Maybe you were lagging behind the competition the entire game but were able to pull ahead at the very end with the post-game stars, incurring the wrath of your formerly sympathetic friends as a result.

Wii Party's games are devoid of this drama and excitement. When one ends, you're either thinking "Was that it?" or "That was neat, I guess." You may have made the best move you could, rolled doubles, avoided having your coins stolen, or something equally fortunate, but it's hard to get very excited about it when the game is so short, so random, and so tame. 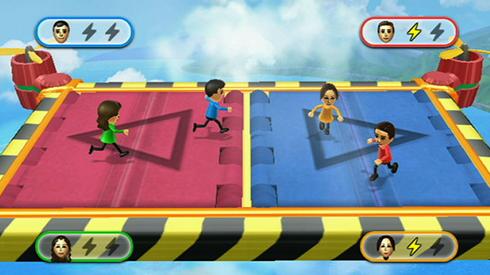 Wii Party offers very little opportunity to plot against other players or to establish a wealth of resources to wage a drawn-out feud. The games that actually allow you to steal from your opponents do so randomly. Instead of choosing who to rip-off, the game chooses for you by spinning a wheel. Wii Party takes this approach with nearly all of its games, diminishing the sense of competition that made its inspiration a success. You're not fighting to win anymore, you just happen to finish first.

The only time you ever feel like you're going head to head with someone in Wii Party is in the minigames, and even those are very hit or miss. Many rely entirely upon luck to win. Stand on one of two platforms and hope yours isn't the electrocuted one. Pick a pyrotechnic shell and hope yours is the biggest and the brightest. Others take longer to read the directions and start up than they do to play. The result is very underwhelming.

With no worthy goal to drive toward and no fuel to get you there even if you wanted, Wii Party just feels like a get-together someone was forced to host. Nintendo followed proper etiquette and provided the essential amenities but are totally lacking in enthusiasm.

A good party is one your forget but desperately want to remember, not the other way around.