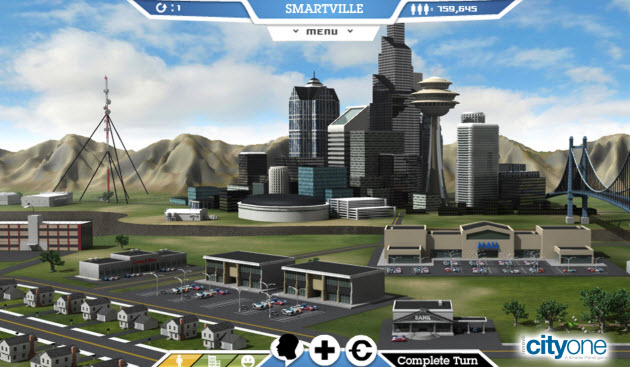 Games are serious business at IBM. The company is announcing the launch of CityOne today, a game that simulates a big city’s operations and shows business and civic leaders how to make their cities and industries run smarter by solving real-world business, environmental and logistics problems.

The game is related to IBM’s Smarter Planet theme, an initiative to get the world running on smarter and greener technologies. CityOne helps city planners, developers, and government agencies figure out how to address the challenges of running a big city, said IBM’s Phaedra Boinodiris, designer of the game. It’s not like SimCity, where you build a city from scratch; rather, you start with a big city and figure out what to do when things go wrong.

The point is to use simulation to educate people quickly and succinctly. The military frequently uses “war game” simulations to practice, and businesses should do more of it. Other big companies such as Cisco have been creating “serious games” to expand strategic thinking in education, business, and government matters.

“This is a really good way to help people understand what IBM does and how to solve complicated problems,” Boinodiris said.

The game has more than 100 real-world scenarios that can help transform how planners deal with alternative energy, traffic jams, water crises, banking needs, and disruptions in retail supply chains. In all of the missions, the user has to balance the city’s financial, environmental and sociological interests. You have to hit profit targets, increase customer and citizen satisfaction, and make the environment greener with a limited budget.

Technologies such as business process management, service reuse, cloud computing and collaborative technologies can make organizations in city systems more intelligent. The game doesn’t have direct advertising within it, but players will probably be able to figure out why they need to buy IBM equipment.

IBM says the problems facing cities need attention, as an estimated 1 million people are moving into cities around the world each week. By 2050, the population of the world’s cities is expected to double. Cities consume about 75 percent of the world’s energy and emit 80 percent of its greenhouse gases. They lose as much of 20 percent of their water supply due to infrastructure leaks. The supply chains of retailers are bloated with $1.2 trillion in excess merchandise.

One of the game’s scenarios involves a city where water usage increases twice as fast as the population, supplies are becoming strained and possibly polluted, and the area is losing almost half of its water through leaky pipes. On top of all that, energy costs continue to rise. To complete the mission, players must come up with a way to deliver the highest water quality at the lowest cost in real-time.

In another mission, the owner of an electronics store has to redesign and expand the store. He or she must also streamline and increase the visibility of the store’s supply chain. The good thing about playing these games is that there are no consequences if you screw something up. If you use them to learn how to avoid problems, you can do a better job in real life when real problems arise.

IBM announced its plans to create the game in May, and more than 7,000 people have pre-registered to play it. IBM consulted with the U.S. Environmental Protection Agency in designing the game. It has also created other “serious games” in the past few years: Innov8, RoboCode, PowerUp and Innov8 2. The Innov8 games are being used by more than 1,000 universities and organizations worldwide. The game is available for free at the CityOne web site above. IBM used Center Line Studios in Raleigh, N.C. to make the game. IBM has also been a big proponent of virtual worlds such as Second Life. Check out a video of the CityOne game below: