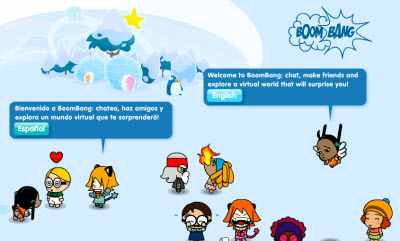 South Korea’s Nexon wants to be a bigger player on the global gaming stage. Today, the company announced it has made an investment in Spanish game studio BoomBang Games.

Nexon acquired 32 percent of the shares of BoomBang, a Flash game developer based in Barcelona. Nexon’s goal is to reinforce its line-up of light community games and to strengthen its business in Latin America, where, of course, Spanish is a popular language. BoomBang Games was founded in 2004 by chief executive Luis Oses and Max Bevilacqua.

The developer creates online games aimed at Spanish-speaking teens around the world. BoomBag lets players decorate their avatars, or virtual characters, and allows them to engage in social activity. Jexon Japan will lead the expansion of BoomBang’s content into as many as 71 countries. The amount of the investment was not disclosed.

Nexon has been making a lot of investments as it takes the profits from its core online game business — fueled by hot free-to-play online games such as Maplestory — and invests them in promising game studios around the world. Recent deals include investments in Ndoors and GameHI, both in South Korea,